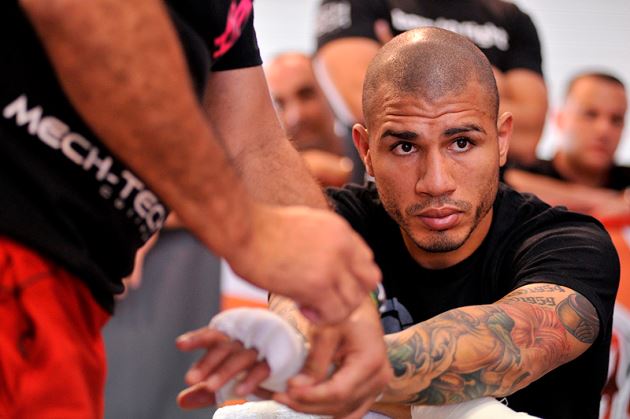 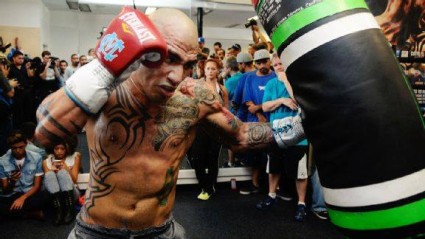 Nestor Gibbs of ThaBoxingVoice.com was present at Miguel Cotto’s recent round table with the press and took the opportunity to address his training situation with Freddie Roach as Roach is currently preparing Manny Pacquiao for his May 2nd super-fight but with Floyd Mayweather Jr.

With Cotto’s next fight against Daniel Geale a mere six weeks away, it would be reasonable to assume he may have to take a backseat to Manny Pacquiao over the next few weeks but Cotto insists there have been no problems and camp is already underway.

It will be interesting to hear what Freddie Roach has to say about how he plans on splitting his time over the next few weeks. Is he simply swinging by Cotto’s training and dropping off the day’s itinerary or is he in there with the same time and energy that he is giving Manny Pacquiao?

As long as Cotto gets himself into the kind of physical shape he needs to be in, I suppose the three+ weeks of preparation after Mayweather-Pacquiao should be more than enough for him to dispatch Daniel Geale.

While on the subject of Mayweather-Pacquiao, Cotto, who has been in the ring with both of them had this to say about the outcome.

“It’s tough fight. The guy who comes with no fear to fail, that’s going to be the winner of the fight”

So who do you think has more to fear going into this fight? Manny Pacquiao has already been knocked out. Does he fear it happening again, or has he accepted that it’s not the end of the world? Meanwhile, Floyd has been hanging his hat on his undefeated record for years. What happens if he loses that?

It’s a strange situation in that everyone is picking Manny Pacquiao but Floyd may be the one going in there with some trepidation. Don’t mistake that for lack of confidence. Floyd is brimming with confidence but the “what if…” factor may be there. If Manny Loses, he’s still got an entire country behind him. If Floyd loses, where will all of the front runners go? People tend to fear the unknown and the ramifications of a Floyd Mayweather loss are about as much of a mystery as anything else in the sport.

If Miguel Cotto insists that the fighter with less fear will win, then he may well have just picked Manny Pacquiao for the win.