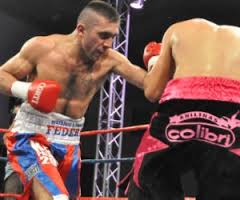 Macau, China (July 17, 2015) – Undefeated No. 1 junior-welterweight contender Cesar “El Distinto” Cuenca of Argentina is just three victories shy of tying Rocky Marciano’s hallowed 49-0 record. He will be looking to cut that victory deficit on Saturday when he battles undefeated No. 2 world-rated contender “Ik” Lian Hui Yang of China, for the vacant International Boxing Federation (IBF) junior-welterweight world title in the main event of “Victory at The Venetian,” at The Venetian® Macao’s Cotai Arena. The fight will be streamed live to the U.S. via www.toprank.tv, beginning at 6:00 a.m. ET.

Cuenca (46-0, 2 KO’s) is tied with Hall of Famer Joe Calzaghe for third place on boxing’s all-time list of undefeated fighters, behind Floyd Mayweather, Jr. and Marciano.

“I made my pro debut in 2002, and I have climbed up the ratings the old-fashioned way, by winning,” said Cuenca, 34. “No one ever did me any favors. I earned my No. 1 world rating by beating everyone who has been put in front of me in the ring for the past 13 years. I have probably boxed more rounds professionally than anyone of my era. Lots of fighters claim they train to go the distance, but I really do.”

Against the Freddie Roach-trained Yang (18-0, 13 KO’s), Cuenca will be going up against a Chinese knockout artist who has gone the distance only once in the past four years.

“I think once we get past the midpoint of the fight, Yang is going to be in very deep and very uncharted waters. We will see who is in condition to go the distance. I want to bring the world title home to Argentina, a country with a proud lineage of great fighters dating back to “The Wild Bull of the Pampas” Luis Firpo.

“Regarding my style I am more Mayweather than Marciano,” continued Cuenca. “Mayweather has had only two knockout victories over the past 10 years. He fights his fight, and he fights to win. That is my philosophy too. After I claim the title, I want to make the most of it and fight only the biggest fights. Perhaps a world title unification with undefeated junior welterweight champion Terence Crawford or move up a weight division in a battle for the best record of our era, against Mayweather.”

Former Fighter of the Year and five-division world champion Nonito “Filipino Flash” Donaire (34-3, 22 KO’s), from General Santos City, Philippines, and 2012 U.S. Olympian and undefeated super-lightweight contender Jose Ramirez (14-0, 11 KO’s), from Avenal, Calif. will also be featured on the “Victory at The Venetian” card. Their fights will be televised to the U.S, via same-day delay, on Solo Boxeo Tecate on UniMás, beginning at 11:00 p.m. ET/PT. Donaire, in the hunt for another world title shot, will be taking on France’s Anthony Settoul (20-3, 8 KO’s), from Clermont-Ferrand, France, in a 10-round super bantamweight battle. Ramírez will open the telecast in an eight-round super-lightweight bout against Ryusei Yoshida (26-7, 13 KO’s), of Kumamoto, Japan.