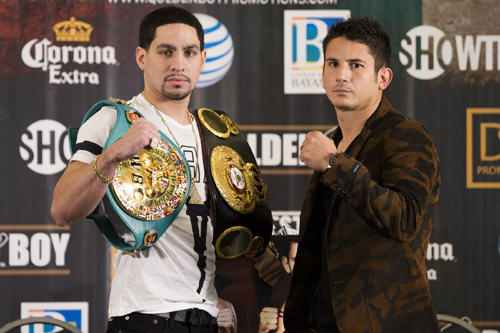 In the main event of Showtime’s Next Generation boxing broadcast, Danny Garcia (28-0, 16 knockouts) was set to defend his belt against Mexican veteran, Mauricio Herrera (20-4, 7 knockouts). The bout was set to be a bit of a homecoming for Garcia as they tried to tap into the always lucrative Puerto Rican fan-base, and with their recent drought of championship level fighters Garcia was hoping to fill that void. This move naturally led to many overlooking Herrera as a competitive opponent, and many instead viewed him as serving as little more than a showcase or a future KO on a Garcia highlight reel. Instead, Herrera went against expectations and turned out to be one of the toughest opponents Garcia has faced to date.

At the start of the bout, Garcia already seemed like the faster fighter. Garcia just seemed like he was the fighter who was able to land most of his significant shots, but it was clear that Herrera was refusing to just go away. With a mix of inside fighting as well as some ugly moments, Herrera pulled every trick in his veteran experience to disrupt and overwhelm his opponent, and in the early rounds it seemed to work.

The biggest thing that Herrera had going for him was his movement and overall footwork. Herrera would masterfully move around the ring as he weaved in an out of Garcia’s range, and did his best to pick and land his shots when available. Even with his movement, Garcia managed to touch up the veteran and there were still points where Garcia was landing flush shots to steal rounds. Even so, it was clear that Herrera would make up for the power difference in sheer heart.

Garcia’s gameplan and approach was clearly offset by the tempo that Herrera was setting, but after a strong verbal lashing from his father going into the fifth round, Garcia seemed to finally realize what a loss in a fight like this could mean to his legacy. With the pressure to perform in front of the “hometown” crowd mounting, Garcia and Herrera continued to punch away in a fight that was as tactical as well as seeming like a brawl at points.

As the middle rounds passed and final rounds approached, both fighters became focused on keeping the fight inside with clinches by Herrera and hooks being thrown by both. It was the clinching by Herrera that seemed to especially upset the tempo of Garcia, but even with that Garcia would manage to pull off some significant shots that would seize the momentum from his underdog opponent. Herrera still chose to keep the fight inside, and this led to an clash of heads that started an ugly nose bleed from the champ.

The fight ended in a manner that was just as competitive as it started. Both fighters managed to be successful in most of the shots they chose to throw, but ultimately Garcia was the busier fighter as well as the one who threw the more significant shots. Aside from a twelfth round which saw Herrera do his best to steal the decision on the judge’s scorecards, it was clear that Garcia has just barely edged the Mexican.

The unanimous decision was awarded to Danny Garcia on scores of (114-114), (116-112), and (116-112). It was undoubtedly a closer fight than the judge’s scorecards seemed, but the type of grueling fight that Garcia had to endure. There’s no telling whether Garcia is in the running for the Mayweather sweepstakes come September, but one thing he continues to prove is that he is a legitimate force in boxing today.