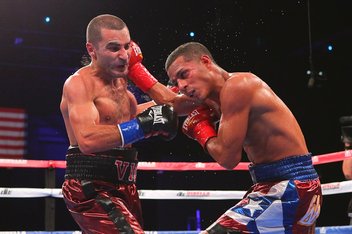 Vic Darchinyan has been a staple and a name in the lower weight divisions. A title holder at flyweight and super flyweight, his resume is a very good one. However coming off 2 losses back to back, and facing a highly touted prospect at super bantamweight in Luis Del Valle, many people wrote Vic off. However, Darchinyan dominated the young prospect winning a lopsided decision and now throwing his hat in there with the top 122lbers in the sport.

Maybe Del Valle wasn’t ready yet or maybe Darchinyan was more focused but being the underdog motivated Darchinyan. “I fought anyone and for me to be underdog it was very unusual just because I lost to a very good boxer in Moreno and fought the judges in Japan. I was an underdog against a kid who never fought 12 rounds and I fought many world champions. They thought I was getting ready for retirement and I told HBO I was going to win every round. It made me more focused and showed my stamina from round 1 until the end, and I train very hard,” Darchinyan told ThaBoxingVoice.com

However, Darchinyan did lose a lopsided decision to Anselmo Moreno and another decision after that to Shinsuke Yamanaka in Japan; both fights were world title fights.  However Darchinyan says style and judges were the reason for his defeats. “In the Yamanaka fight, I was winning the fight but he cut me with his elbow and in WBC rules, when there’s a cut before the 4 rounds you go to the scorecards, but it never did. So I was going to go for the knockout because I was afraid they’d stop the fight. I went over to the Japan and had to fight him and the judges. Plus they run a lot. I don’t like to fight chickens; I like to fight guys who want to fight, not run.”

Now in a new division and a somewhat  feeling of resurgence, Darchinyan makes no mistakes about who he would like to fight next, two guys he has been defeated by.  Darchinyan stated, “Nonito Donaire calls people out, call everyone out but doesn’t want to fight me again. He beat me by one punch but doesn’t want to give me a rematch. I was the champion when we fought but he’s a chicken and doesn’t call my name out. Abner Mares beat me by one point; I slipped when they said he knocked me down. He also doesn’t want to fight me. But I want rematches with both or anyone that’s in 122.”

Whether it is by one punch or one point as Darchinyan calls it, he certainly feels at 122, there are fights to be made and wins to be won. “I’m moving up like them 2 (Mares and Donaire), I want to fight them. I came up to fight a guy that came down in weight, and I came up in weight and I showed I was smarter than him. I just want to mention Abner Mares, I would knock him out and Donaire doesn’t want to fight me,” explained Darchinyan.

The ‘it’ fight at 122 lbs and maybe in all of boxing is Nonito Donaire and Abner Mares. However because of promotional rifts, the fight may never materialize to find out who the best super bantamweight is. Even though he has been in the ring with both and would maybe have an idea of who the better fighter is, Darchinyan has no care to find out who the better of the two is; but would rather beat the two as he continued to say, “I don’t know who’s better, I just want to fight them both. I’m more interested in fighting them than them fighting each other.”

Whether he gets them or not is a tough question to answer. However, his contract with long time promoter Gary Shaw has expired and he’s exploring his options for fights as well as promoter. “If they’re scared (Donaire and Mares), I am going to go to the next opponent. At the moment I’m a free agent and looking for whoever offers me the biggest fight.  Me and Gary Shaw are good friends but my contract is expired but I’m looking for for the best fight possible. At the moment I don’t know what’s going to happen, but it’s whoever offers me the big fights.”

A big fight that might be out there for the former two division champion and a fight he wouldn’t rule out, is against IBF Bantamweight title holder Leo Santa Cruz. Cruz who has been as active as any world title holder is rumored to be dropping his bantamweight title and moving up to north to super bantamweight. Darchinyan loves Cruz’ style and the fight he would bring. “He’s a warrior and I love guys who come to fight, and that’s him. I’d love to fight him anytime, even for my next fight. I like to fight guys who aren’t chickens. I’ll go down or up for the best fights whether it’s 112 to 122.”