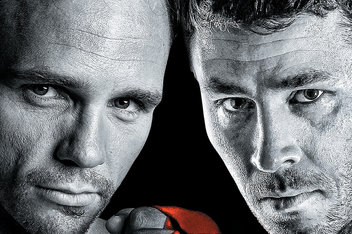 31 year old British Middleweight ‘Dazzling’ Darren Barker looks to be in the perfect place both mentally and physically ahead of his second world title shot this Saturday in Atlantic City.

Barker will square off with Australian Daniel Geale with the IBF title on the line. Barker is a technically very skilful boxer who has good amateur pedigree including a gold medal at the Commonwealth Games in 2002.

Barker currently holds an impressive record of 24 wins and just 1 loss. The one loss on his record was in his previous world title opportunity against a man who many regard as the king of the middleweight division, Sergio Martinez. Martinez is rated highly in pound for pound lists and with a record of 51-2-2, is a great boxer.

The presence of this loss to Martinez on Barker’s record is no disgrace at all and has in fact improved him as a fighter. Barker has admitted that he showed too much respect in the fight and now knows that he cannot afford to that on his big night.

Barker has in the past suffered from injury problems but these now seem well and truly in the past and he seems to have gained greater punch power in recent years as he has got physically stronger.  His recent victories over the likes of Kerry Hope and Simone Rotolo are testament to this increase in both power and a new nasty streak with both suffering destructive losses.

Barker seems really switched on for this fight and has everyone that he needs there with him in his camp in New Jersey. He seems to have the balance right between being focused on the fight and then switching off and relaxing at times. He seems in the right place and as though this is really his time to become a world champion.

Daniel Geale aged 32 is the current champion and comes into this fight full of confidence believing that he is a better all-round boxer than Barker. Geale has respect for Barker and admits that he is a good boxer but is quietly confident that he will be the man with his hand held at the end of the night.

Geale has a similarly good amateur back-ground also containing a gold medal at the Commonwealth Games in 2002 but at welterweight. Geale is also a technically good fighter and will provide a formidable opponent for Barker.

Geale holds an impressive record of 29 wins and 1 loss. His one loss to Anthony Mundine was avenged last-time out via a unanimous decision. Geale also holds an impressive win over German Felix Sturm, who Brits Martin Murray and Mathew Macklin failed to beat. Geale is a good fighter and will be looking to turn around the fortunes of Australian sport in recent times and claim the victory of the Brit.

I am expecting Barker to come out really up for this fight and claim the win. I believe that this is the right time for Darren to show that all his injuries are behind him and that he is a top level boxer. He has gained great experience from his fight with Martinez and will know exactly what to do in his second shot at glory.

Barker will respect Geale but not too much as he truly believes that he is a superior fighter. He is a man who is a great professional and has been through a lot in recent years and deserves all the success in the world.

Following what I see as being a late stoppage victory for Barker I hope that some huge domestic fights can be made. The likes of Martin Murray, Mathew Macklin and Andy Lee are all very good fighters and would provide for some great action.

The British middleweight scene is so strong at the moment and these fights would be massive occasions. If these were not to materialize than possible opponents include the likes of the seeming new star of the sport Gennady Golovkin or against Julio Chavez Jr. Another opportunity may also be a rematch with the Argentine Martinez and a chance to set the record straight for Barker.

At the moment all this talk means nothing it is all about Barker going out there on Saturday and doing the job. Darren Barker’s time to shine or Geale to show why he is the champ?