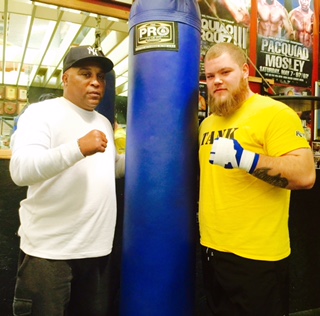 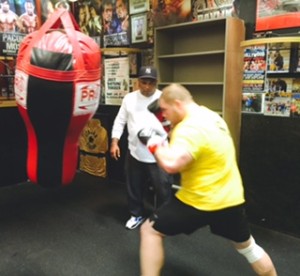 Just a few short weeks ago at the 2300 Arena in Philadelphia, Joey “The Tank” Dawejko of the Club 1957 Management team scored an emphatic knockout victory that has propelled him to a main event attraction against Amir Mansour at the same venue on May 8th that will be televised live on ESPN’s Friday Night Fights.
Dawejko needed just twenty-seven seconds to dispose of Enobong Umohette in a heavyweight bout that made the Philadelphia fans at the Arena go wild!

Dawejko of Philadelphia registered his 6th consecutive win and 4th straight first-round knockout as he took out Umohette with a single left hook.

“It was explosive, and it felt great,” said Dawejko. “I am ready now for bigger things and will finally get to showcase my talents against Amir Mansour on May 8th.”

“I am excited to be the Main Event on the ESPN card. I believe I now have a value and will do whatever it takes to get to the top. I moved this camp to Los Angeles to train with Buddy McGirt. From day one. Buddy walked into the gym with a plan, and things have been great. I feel like I have known Buddy forever as his style of training is suited perfectly for my style of boxing. I couldn’t be happier with the way things are going at this point in my career.”

“I am also really excited because my fiancee Maria is having our second baby together and is due any day now! I plan to Skype into the delivery room. I know that Maria is behind me 100% always supporting my dream. I also want to thank my manager Mark Cipparone and my promoter Russell Peltz for making this fight happen.”

When asked about the fight with Mansour, Dawejko finished, “I think it will be an explosive fight which will end with Amir sleeping on the canvas! I am 100% focused and ready for this fight. I can’t wait for May 8th.”

“I can already see the chemistry and mutual respect that has developed between Buddy and Joey in just a few days. Joey came to camp a smart fighter, and although he has only worked with Buddy for one week I can say with clarity that he is already a better fighter. This is exactly what Joey needed, and the timing could not have been more perfect. Joey is going to be a big problem for the heavyweight division and May 8th will be the first step towards his run to the top! Boxing fans should expect nothing less than greatness from “The Tank” that night because he will be prepared for war! ” said Dawejko’s manager Mark Cipparone of Club 1957 Management
Club 1957 Management was founded in 2013 by local businessman Mark Cipparone. Cipparone is the owner of the widely successful and popular Rocco’s Collision. Since the formation of Club 1957 Management, he has guided the careers of some the top fighters in the country. Currently, he manages Heavyweight Joey Dawejko, Welterweight Raymond Serrano, Jr. Lightweight Tevin Farmer and some others.