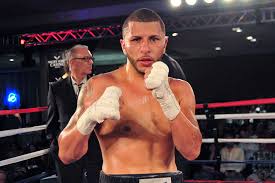 This Saturday night at the Valley Forge Casino Resort, rising Jr. Lightweight Frank De Alba will look to win his 12th straight and try to remain unbeaten in 14 in a row when he defends the UBF All America’s Super Featherweight title against Jesse Carridine (8-3-2, 4 KO’s) of Las Vegas.
The bout will headline a 6-bout card promoted by King’s Promotions and Peltz Boxing.
De Alba of Reading, PA has a record of 13-1-2 with 5 knockouts is coming off his title winning effort when he stopped Pablo Batres in 5 rounds in Reading, PA.
De Alba has been working very hard at the King’s Boxing Gym for the better part of two months.
“Everything is good.  I have been training 8 hard weeks and I am excited for Saturday to come,” said De Alba.
He knows he will be tested by Carradine, who has fought top competition.
Carrainde is a tall (listed at 5’10”) Super Featherweight.  He has fought great guys and his only losses are to current world champion Ecgeny Gradovich and top-undefeated prospects Omar Douglas and Karl Dargan.  I know I can not take him lightly.”
De Alba has been hitting harder in recent fights and he credits to some things in the gym that he has been working on.
“I am sitting on my punches more.  I know that I have power.  I do not go in there looking for a knockout but I am have been working on siting on my punches more.  So if it comes, it come.”
With this current streak, the 27 year-old, who was born in Bayamon, Puerto Rico knows that the biggest fights are going to come sooner rather than later.
“Hopefully I can get this win and I know bigger names and opportunities will come.  This fight will put me one step closer.  I have been working very hard.  This is the hardest I have worked.  I am ready for 8 hard rounds and whatever my opponent brings.”, finished De Alba.
In the 8-round co-feature, undefeated Naim Nelson (12-0, 1 KO) of Philadelphia will take on Ryan Belasco (18-6-3, 3 KO’s) of Wilmington, DE in a battle for UBF All America’s Jr. Welterweight title.
Jon Bolden (6-9, 5 KO’s) will take on an opponent to be announced in a 6-round Heavyweight bout.
Shawn Sutton (0-2-1) of Norristown, PA will fight Anthony Prescott (3-3-2, 1 KO) of Cherry Hill, NJ in a 4-round Jr. Middleweight bout.
Christian Molina (2-0, 1 KO) of Allentown, PA battles Josue Rivera (2-5, 2 KO’s) in a 4-round Jr. Welterweight bout.
Travis Thompson (5-11-3, 3 KO’s) of Pottstown, PA will box Benjamin Burgos(1-8-1) of Mount Pocono, PA in a 4-round Lightweight bout
Tickets for this great night of boxing are priced at $125, $75 and $45 and can be purchased by calling Kings Boxing at 610 587-5950 or Peltz Boxing at 215 765 0922