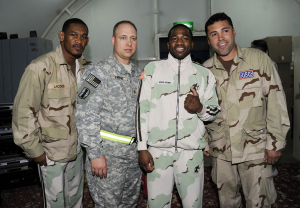 A couple weeks ago, on the Floyd Mayweather – Marcos Maidana undercard, Adrien Broner made his return to the ring in a fairly easy, unanimous decision, win against Carlos Molina. However, it wasn’t the win that people were talking about after, and still are today. It was the post-fight comments made by Adrien Broner that have captured the headlines since that event, which has since led to numerous angry fans on social media, an apology video made by Adrien Broner, whether you believe the sincerity is up to you, and the WBC now suspending Broner.

Recently ThaBoxingVoice caught up to “The Golden Boy” himself, the founder of Golden Boy Promotions, Oscar De Lay Hoya, to get his take on the Broner situation. When we brought up the WBC suspending him until he apologizes, Oscar said, “I think it’s fair, I mean why not, absolutely its fair. He offended people and they could have suspended him for years or a year or fined him, they could have done a lot of things, but I think the WBC just wants to show the public, not just boxing fans, but people in general, ‘hey this is already a sport that has it’s controversies’ so the WBC did a good thing in standing up and suspending him, I think they did a great thing.”

Oscar continued on to say “I still believe in him (Broner), I really do. Here’s a kid I took to Iraq for 3 weeks with Seth Mitchell, with Danny Jacobs, we all went to Iraq, we’re having a good time, we’re there for 3 weeks and he’s so charismatic with the troops, and so nice. I’m saying to myself, ‘you know what, I’m thinking Sugar Ray Leonard’, speed, power, charisma. Not as good looking as Sugar Ray Leonard, but you know what I mean. But then he comes back and (snaps his fingers) he changes. I don’t know, I don’t know, but is he talented? Yes he is.”

Oscar De La Hoya’s comments on Broner just lead into the mystery of Broner’s true personality. Is this all an act? Does he really believe some of the things he says? Is he just a kid that talks before he thinks? Is the real Adrien Broner the guy that De La Hoya spoke of that was so nice and great with the troops or is the real Adrien Broner the guy that makes comments in the ring that people are now calling him a racist? One thing is for sure, for the 24 year old Broner, he will have to grow up quick, but if he doesn’t, the public media may for him too earlier than he wants.