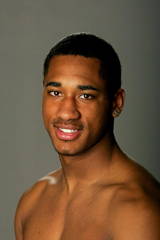 Providence native and 2008 Olympian, Demetrius “Boo Boo” Andrade has been a highly touted junior middleweight prospect for a little while now. On January 25 he will be looking to take a step up and move closer to top contender status when he takes on the tough veteran Freddy Hernandez at the Paramount Theater in Huntington, New York on Showtime.

“It’s a big move. It’s a big step because this fight determines which way I’m going to be going. This step right here is going to put me either closer to greatness or it’s going to put me back to where I got to fight a few more times on ShoBox because I didn’t look good,” Andrade said. When asked about the step up in opposition and the opportunity to fight live on Showtime he went on to say, “Honestly I said just make the fight happen whoever it is. If this is the fight that I need to get me to the next level and improve my ranking and for me to get to HBO or Showtime then lets just make it happen.”

Just like many East Coast fighters have done as of late, Andrade has chosen to relocate to California for the opportunity to be able to train in the warmer weather and get higher quality training and sparring. “It was basically my idea to come out this way and basically look for a team because the only thing that I was missing was a team. I never really had a strength and conditioning coach or a nutritionist, somebody that’s been there and works with fighters and knows what it takes and what the risks are in the game of boxing. Out in Rhode Island and Florida I didn’t have that,” he explained. He will also be working with the top pound for pound fighter and current Super Middleweight Champion of the World, Andre Ward’s trainer, Virgil Hunter.

When asked why he chose Hunter Andrade said, “I based it off of what Andre Ward did. He beat a lot of tough great fighters like Carl Froch, Arthur Abraham, and Chad Dawson. These guys are real powerful fighters and he walked through them. I’m basing it off of what his strategy is going into these fights. I want to be around a great team and I know he has a great team and all the resources that I need as a fighter to take it to the next level.”

Although he claims that he’s not looking past Hernandez, Andrade can’t help but look to the future and think about the bigger more lucrative fights that lie ahead of  him. “I want to fight “Canelo” (Saul Alvarez) because he hasn’t fought anybody. He fought Shane Mosley but he was on his way out. He doesn’t fight a full three minutes. This guy throws a few combinations and runs around and fights 140 pounders. My time will come when it gets there,” he said.