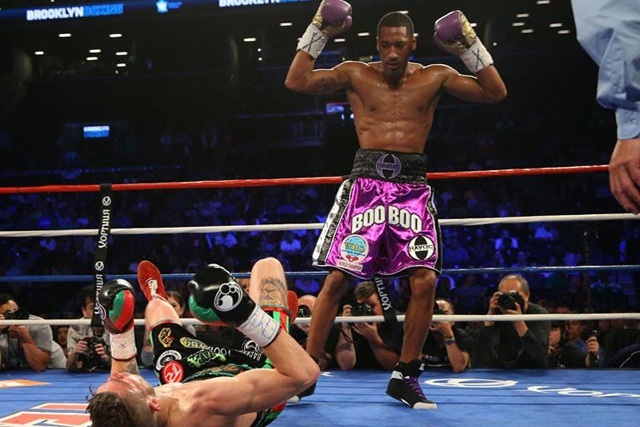 The first four rounds of this fight, before the event took place I described in a blog as being “crucial for Rose” I.E. He had to grab hold of the nearest telegraph pole for twelve minutes, and grip as tightly as the muscle fibres in his hands would allow, as the early tornado tore past him throwing torn Trees and vehicles his way. The debris being of course, the flying fists of the super confident Andrade.

I noted “The early onslaught will be tremendous from Andrade, keen to impress and to come charging out the gates with Power. He will go for the knockout.”

It’s after those words my pre fight predictions fell a little askew.

Brian Rose got completely outboxed in the fight. The gap in class at times so vast, it was almost awkward to watch. An investigative right hand in the 1st which set up a solid curling left, catches Brian square on and drops him.
This is the storm, as expected; no real surprises, but still no less unsettling, simply because one saw it approaching.

A noticeable hesitance from Rose to risk an opening in his defence because the taste of the champions power was unpleasant, is stalling any kind of jab or straight lead punches he usually offers an opponent by the 2nd round. This has Andrade moving in any manner around the ring as he pleases, knowing nothing will be there to deter him should he decide to step on the gas, which he does, several times throughout the course of this one sided bashing.

By the 3rd Rose is looking horribly over matched, has already taken a painful battering to his defences. Andrade on the flip side of the coin? Well, the brothers looking even more comfortable, the rhythm in his movements oozing class.

In the same 3rd round a cracking right hand counter lands as an overly eager Rose attempts to push some kind of offensive argument, he’s floored for doing so. This pattern of dominance runs through to the sixth, where the sound of an off beat drum can be heard, Andrades gloves booming against the rib section and broken guard of Rose over and over. He has nothing in reply

The shows closed in the 7th round, a right hook to the ribs to disguise an immediate rocket propelled uppercut almost taking Brians head off and it’s the last curtain call for Rose. Another pole axing straight left, a cutting right to the mid section again, with a few more little tasters to follow on top. We don’t really need to see any more, this one is done.

A defenseless Rose backed up on the ropes, a kind hearted referee Micheal Griffin. The UK’s hopes waved off in the 7th. Brian Rose is stopped on his feet, the bridge of his nose, presenting a clear red divide. Sadly that injury, along with some other selected badges of war will be all he is taking back to the UK with him.

The WBO light middleweight belt is staying in the USA.

As for Andrade, the world is his oyster. The future beams extremely brightly for this young man, who was gracious in defeat may I add. That at the very least, gave our battered hearts some consolation. Best of luck to him.

The UK will have it’s time again…