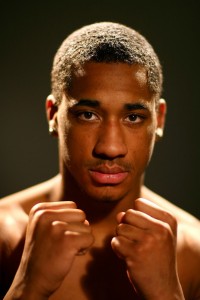 “We’re very excited for Demetrius to get this world title opportunity and congratulate K2 Promotions on their winning bid” said DeGuardia. “We’ve believed for a long time that Demetrius would win a world title and we are honored to present him with this opportunity.”

With a record of 19-0-0 with thirteen stoppages, the 25-year-old Andrade has utilized his world-class skills to dominate opponents since turning professional in 2008.

A native of Providence, Rhode, Island, Andrade was a member of the 2008 U.S. Olympic Team. He is coming off a ten round shutout decision win over former world title challenger Freddy Hernandez on JANUARY 25, 2013 at The Paramount in Huntington, New York before a standing room only crowd in a bout broadcast on SHOWTIME.