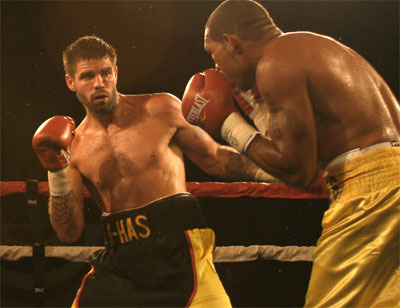 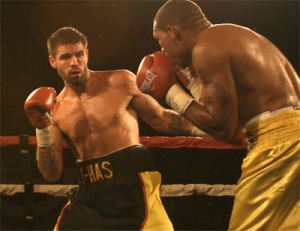 This Saturday night, Dennis Hasson will look to get back in the win column when he takes on Taneal Goyco in the main event of a card at the Valley Forge Casino Resort.

The show is promoted by Kings Promotions.
Hasson of Philadelphia has a record of 16-1 with 6 knockouts.

The 30 year-old Hasson is settled in a Light Heavyweight and has a solid win over Daniel Judah to his credit.  He is coming off a 4th round stoppage defeat to Tyrell Hendrix on June 27 in Las Vegas.

That fight was a shocking defeat as Hasson was rolling along undefeated until the surprise defeat to Hendrix.
“I take full responsibility for that defeat.  I did not have to take that fight.  I just went in there and lost,” said a candid Hasson.
“I have come full circle as I am back with my original team of Buddy Osborne and Johnny Rivera and we are back to basics and we will see the best results.”
In Goyco, Hason is fighting another man from Philadelphia who comes to fight.
“I know Goyco is a good fight for us.  Like myself, He is coming off a loss.  We are both from Philadelphia and this will be a good fight for the fans.  I am looking to put on a good show and come out victorious.”
Hasson isn’t letting the set back bother him as he feels that the Hendrix fight was just a small bump in the road.
“Some of the greatest fighters have suffered glitches in their career and they have gone on to have Hall of Fame careers.  I will not let that hold me back from going forward.  That loss will not break me.  I have learned and will come back stronger”
Despite having a record of 6-8-1 with three knockouts, Goyco has wins over Dennis Morris (1-0), Frankie Filippone (14-2-1) and Jeremy Trussell (8-0).
6 Round Bouts:
David Grayton (9-0, 8 KO’s) will take on an opponent to be announced in a Welterweight bout.
In Four Round Bouts:
Sulhtan Staton (3-0, 2 KO’s) takes on Ramon Ellis (4-13-2, 2 KO’s) in a Lightweight bout.
Carlos Rosario (0-1) of Pennsauken, NJ will battle Eliezar Mendez (1-0) of Reading, PA in a Jr. Lightweight fight.
Martin Lagunas Jr. (1-0, 1 KO) of Ruskin, FL will take on an pro debut Diamond Mitchell in a Welterweight fight.

In a featherweight contest, Johnnie Rolon of Florida will make his pro debut against fellow pro debuter Ruben Swain of Ohio.

Samuel Berman of Collegevile, PA will square off with Jamikey Woods (0-1) of Stateville, NC in a Welterweight bout.
Tweet