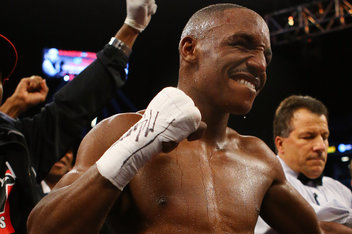 Big time boxing hasn’t been in Michigan since that god awful night of the Alexander vs. Bradley match up last January 29. at the Silverdome in Pontiac, Michigan. Alexander has to take as much as the credit for that nights turn of events as anyone, since he’s 50% of the puzzle, that found most media ridiculing that fight not only for its outcome, but more for its choice in location for venue.

It was a battle of the unbeaten records, a fight that media and boxing fans wanted and clamored for. It was the fight that would prove who was the best junior welterweight in the division. Unfortunately the bout ended in a 10th round clash of heads which stopped the bout prematurely and led to an early night for the judges. Bradley won on scores of 98-93, 97-93, and 96-95. The head-butt was one which opened a bad cut on Alexander’s right eyelid, and the second and final head-butt that opened a stinging cut just outside of Alexander’s left eye, which left him unable to open his eye during the time the doctor took a look at him.

That night in question left a sour taste in the mouths of fight fans and sports media. Alexander’s been attempting to make a crack at changing that image of being a quitter from the minds of critics.

Five months later he would take on hard-nosed, fan favorite Lucas Matthysse only to come away with a controversial split decision win, which many felt he lost. It’s not as if he didn’t try to change his image and become more of an appealing fighter taking on tough opponent after even tougher opponent. His next bout would see him making his debut at welterweight, bringing clarity to the rumors of his lack luster performances due to issues making the junior welterweight division limit.

Against Marcos Maidana, Alexander would shine bright and live up to his moniker of “The Great”. But it’s impossible to please everyone, and critics and fans alike found something to criticize Alexander about even after a completely one sided dominant performance he was also ridiculed for a recorded 117 clinches.

Randal Bailey would be next and would also be Alexander’s first welterweight title shot, a fight not too far removed from fight fans minds. Alexander-Bailey was known was seen as the worst fight on the Brooklyn Pride Card that night due to the manner in which it formulated, words such as snooze fest were best associated with that fight among other names.

February 23, marks Alexander’s first title defense, one against an inexperienced opponent in comparison to Alexander himself; the type of opponent that Alexander should look good against. Brook is a guy that isn’t hard to find in the ring. 2013 is going to be a big year for my career and I’m going to get it started right in an exciting fashion against Kell Brook,” said Alexander.

Myself personally I’m hoping to see the Alexander of late, the Alexander in the Urango fight, the Alexander that once excited me to know he was gracing the ring. I’m sure we all want Alexander to take us back to that night where one fatal uppercut put Urango out of his misery.

Truth be told, Alexander has the skill to make it a boring long fight, where he can find himself on the right side of any scorecard having him the unanimous victor. All the pressure is on Kell Brook coming to enemy territory, newfound land hoping to be the conqueror that night. Brook wants go back to England with the gold strapped around his waist and the bragging rights of beating one of the top American Welterweights.

Alexander the great was known for many victories in battle, Devon Alexander hopes to follow in those footsteps. “I worked extremely hard to win my title and I’m not giving it away to anyone.  This will be a statement-making fight for me.”