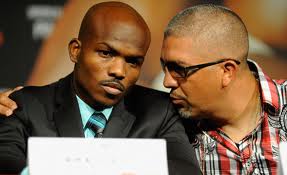 For the first time in six years, Timothy Bradley will enter the ring without a world title after suffering his first professional loss to Manny Pacquiao this past April.

Bradley (31-1, 12 KO) will return after an eight-month absence to face Diego Chaves on December 13th from the Cosmopolitan of Las Vegas in a 12 round bout, non-title bout.

This move surprised many in the boxing community considering Chaves’ loss to Brandon Rios, a fight that many saw as an embarrassment.

A fight that slowly developed into a foul-filled mess, referee Vik Drakulich officially called a halt to the bout at 1:26 of Round 9 in favor of “Bam Bam” Rios (32-2, 23 KO) by disqualification after three combined point deductions.

Bradley earned the respect of fans after going toe-to-toe with Pacquiao. Despite the loss, there were bright lights ahead for Bradley. However, how is he going to build off that fight against a man like Chaves? We had the opportunity to speak with Bradley’s trainer, Joel Diaz.

“Unfortunately, Bradley does not have the privilege to pick his fighters like everybody else,” stated Diaz. “The boxing sport is a business and Bradley has paid his dues. He has worked extremely hard to be where he is. He has never been fed with easy fights,” he added.

Perhaps Bradley has not received the credit he deserves. In 2011, Bradley fought Pacquiao for the WBO welterweight title. At the time, Pacquiao was undefeated in his past 15 fights, including eight knockouts. Although a majority of analysts and fans saw Pacquiao as the victor, Bradley showed a tremendous amount of heart, which was also on display against Ruslan Provodnikov.

In his bout with Juan Manuel Marquez, Bradley fought a technical bout to mitigate Marquez’s power, and it worked. Bradley held on for a split decision victory in a bout that I personally scored eight rounds to four for “Desert Storm.”

If one were to ask Bradley if Chaves was the first option, he would probably say no.

Initially, Bradley was offered a chance to fight Miguel Cotto and Mike Alvarado. Cotto decided to take the rest of the year off and Alvarado reportedly has plans to fight Brandon Rios for a third time in 2015. Like the Provodnikov decision, Bradley was not left with many options.

Diaz has never been one to not express his opinion about who his fighters should take on next.

“I would consider Timothy Bradley with Amir Khan because they left ashes in the oven over the years,” said Diaz. “Tim Bradley and Danny Garcia would be a great fight.” “I want to see the good fights to give the people what they want to see, even Bradley with Keith Thurman,” he added.