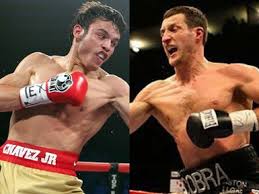 A much anticipated fight between Julio Cesar Chavez Jr. and Carl Froch is under negotiation according to a report on ESPN.CO.UK. According to the report, Froch is disinterested in fighting a fight against James Degale and is hopeful a bout with Chavez Jr. can be made in Las Vegas on January 31th.

“Talks have reopened with Chavez and Top Rank,” Hearn told ESPN. “I’ve had talks with Carl about DeGale and Kessler but he says he wants the Las Vegas fight and I have to deliver that for him.

“Talks with Top Rank will continue this week, I have a conference call with them tonight, and I’m hopeful I will deliver the fight that Carl Froch wants, which is to tick off a box of fighting in Las Vegas to crown what has been a sensational career.

“Top Rank came on and said they are talking to Chavez Jr. this week. I can’t go too much into it because there are contractual issues between them.

“January 31 was always the date with HBO pay per view TV, but I’m not at the stage of talking dates yet.”

Now Chavez Jr. has said he is a free agent but Top Rank refutes that notion and hold firm the belief that he is still under contract. Chavez since his last fight with Vera has passed on a fight with Gennady Golovkin who fights this weekend. Much speculation has been made that Chavez Jr. wants to branch out on his own much like Floyd Mayweather and Miguel Cotto have done with no long term deal with any promoter.

Froch has always wanted to main event a fight in Las Vegas and a fight with Chavez would certainly be a pay-per-view event and one on the weekend of the Super Bowl would be a big event if the January 31st date holds true.