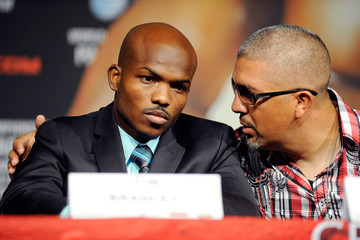 Joel Diaz is preparing Tim Bradley for what is likely the most important fight in both of their careers. They are both looking for redemption, vindication, and above all us want to prove to the world that Tim Bradley can beat Manny Pacquiao without controversy. Diaz was a guest of Tha Boxing Voice Radio show where you could hear sincerity and honesty throughout the interview.

On Bradley being more matured since their first fight with Pacquiao:

“Tim has grown after going to war with Provodnikov and out pointing the guy that knocked out Manny Pacquiao. If Tim didn’t have to lose a lot of weight and dehydrated, he would have took those punches better. After the Provodnikov fight, he was concussed and had to take time off before the Marquez fight. After the Marquez fight, he was back in the gym Monday. He’s training great and right now his weight is at 158 comparing it to the Provodnikov, he was 178. Before the concentration was 50 percent on weight and 50 percent on strategy. Now its 90 percent on strategy 10 percent on weight.  In the Provodnikov, he was at 163 and couldn’t lose any more weight and this was two weeks before the fight. So I brought in a nutritionist to help him lose weight. In a few days he was 158. The day of the weigh in we went to a sauna for Tim to lose weight.  In the first Pacquiao fight, the feet was swelled up especially the right foot, he still fought 12 rounds and Pacquiao couldn’t event touch him. The commentators influenced the fans by saying these punches were landing but they really weren’t”

Bradley’s hard luck when it comes to drug testing:

“We really don’t have much of a say. Tim Bradley always been unfortunate went it comes to decisions. The business has always been against him. It should have been the right move to do VADA but there’s always someone interfering. Tim’s doing both tests and Pacquiao’s only doing Nevada. There’s always doubts but I hope they take care of it. A lot of things have changed since some of the key members are not around with the Pacquiao camp. I didn’t see a spectacular Manny Pacquiao against Brandon Rios. Even Brandon Rios said he didn’t hurt him, it was just his speed. I remember when he fought Margarito, he crushed his face. When he fight Cotto, he broke his face. With De La Hoya, he demolished him. All of a sudden with Rios, he’s not doing any damage. We’re going to fight against all odds and we’re going to defeat those odds.”

Why Bradley resigned with Top Rank:

“We had to take it. If he didn’t sign another two years with Top Rank, we don’t get the Pacquiao fight. If he doesn’t sign with who else is he going to fight? We have to take the best possible chances we could take.”

The Possibility of a Mayweather fight had Bradley signed with Golden Boy:

“What guarantees you that there is a fight with Mayweather? He chooses who he fights. Nothing is for sure in life. I don’t tell him what to do as a trainer but just give him advice in the business aspect. How many fights would you have to fight to make what you’re making in one fight here at Top Rank? 3 or 4? With Golden Boy all those fights are risky fights and you never know for sure you’ll get the Mayweather fight and if you do, do you make that same money. Boxing is a business too. Tim’s been making good decisions on the back end.”