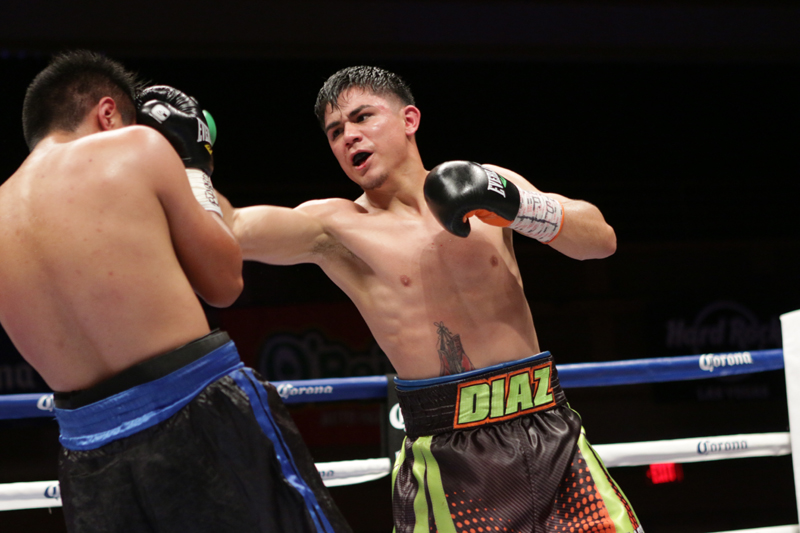 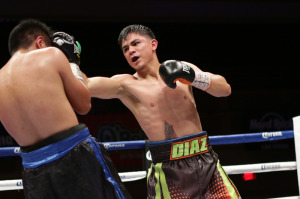 They are four of the most unique personalities in boxing today, but what the headliners on the Thursday, Nov. 13 edition of FOX Sports 1 and FOX Deportes’ Golden Boy Live! series all share is respect throughout the sport as rising stars with world championship potential. Fight fans will be in for a treat at Fantasy Springs Resort Casino in Indio, California, when Joseph “JoJo” Diaz Jr., Julian “El Camaron” Ramirez, Diego “The Golden Kid” De La Hoya and Taishan all take to the ring in their own pivotal bouts that will push them to the limit.

In the 10-round super bantamweight main event, 2012 U.S. Olympian Diaz will look to follow up last month’s spectacular headlining win over Raul Hidalgo with another defining performance against an opponent to be named.

In the eight-round co-main event, 21-year-old featherweight phenom Ramirez is back in action, with 20-year-old super bantamweight De La Hoya competing in a six-round bout and seven-foot Chinese sensation Taishan will open the telecast in a four-round heavyweight contest. Fight fans are in for a rare treat as Nov. 13 will be just the second bout of Taishan’s highly anticipated professional career.

Opponents for Diaz, Ramirez, De La Hoya and Taishan will be announced shortly.

“The future of boxing has never been brighter, and the four young men lacing up the gloves on Nov. 13 are among those carrying the torch from one generation to the next,” said Oscar De La Hoya, president and founder of Golden Boy Promotions. “Fans will get to see scintillating action from fighters in a full range of weight classes, all of whom have two things in common – they represent the future of our sport, and none have ever tasted defeat.”

A member of the 2012 United States Olympic team, South El Monte’s Joseph Diaz Jr.(12-0, 8 KOs) is rapidly displaying the skill and poise to not just match his amateur successes, but surpass them. Just 21-years-old, Diaz is gearing up for his third 10-round fight, and since his impressive victories over Ramiro Robles and Raul Hidalgo, Diaz is more than ready for another test on Nov. 13.

The great nephew of the late former world champion Genaro Hernandez, 21-year-old southpaw Julian Ramirez (12-0, 7 KOs) has boxing in his blood, and he’s been on the fast track ever since he turned professional in 2012. A dynamic fighter with all of the tools to succeed, Ramirez is coming off of his third win of 2014 when he faced Ricardo Hernandez on Sept. 27, and he’s hungry for another victory.

Another fighter with boxing running through his veins is 20-year-old Diego De La Hoya(7-0, 5 KOs), the cousin of “The Golden Boy” himself, Hall of Famer Oscar De La Hoya. Already sporting seven wins in a little over a year as a professional, the Mexicali native has become a favorite at Fantasy Springs where he will make his fifth appearance this Nov.

Hailing from Beijing, China, seven-foot tall Taishan (1-0, 1 KO) is one of the most intriguing fighters to enter the ring in years. After his impressive second-round technical knockout of Alex Rozman in his professional debut in July, he showed that he’s not just a great story, but a great young man with the potential to one day shake up the heavyweight division. The former kick boxer and mixed martial artist was a highly respected amateur boxer who moved to the U.S. to take his career more seriously and improve his prospects of defeating the best competition. He’ll get the chance to showcase his dominance of the professional ranks again on Nov. 13 at Fantasy Springs.