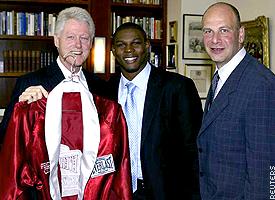 Lou DiBella has been a boxing promoter for the past 16 years. He is the founder and CEO of DiBella Entertainment based in New York City. DiBella Entertainment has represented the likes of former WBC Middleweight Champion Sergio Martinez, former middleweight champions Jermain Taylor and Bernard Hopkins, former light welterweight champion Paulie Malignaggi, and former WBC Welterweight Champion Andre Berto among others.

Today, DiBella is trying to reshape his well-known organization for the future, for example, investing in raw, young talent into his stable.

One of those young fighters is a 22-year-old fighting out of the light middleweight division in Alantez Fox. Fox (13-0-1, 4 KO) caught the eye of DiBella after his spirited bout with Frank Galarza (15-0-2, 9 KO) when they fought to a split draw battling for the then vacant USA New York State Light Middleweight Title. “He is tall, he is lengthy,” added DiBella. “Both Galarza and Fox have the ability to be championship contenders.” In addition, DiBella left the door open for a possible rematch.

Andy Lee has spent time fighting at the super-middleweight, middleweight, and light-middleweight levels. Lee was scheduled to have the fight of his life against Gennedy Golovkin, but the fight never happened. What happened to stall that fight. “It was scheduled a long time ago and then Golovkin’s father died and they changed course,” said DiBella. “He ended up fighting Daniel Geale.” Lee is comfortable fighting at either 154 or 160, but is not going to wait for Golovkin to come around.

Edwin Rodriguez (24-1, 16 KO) suffered his first professional defeat after a dominating performance from Andre Ward. Lou DiBella confirmed to Tha Boxing Voice that Rodriguez has moved up to 175 and will fight Azea Augustama (17-1, 9 KO) on October 18th. The fight with Augustama can be seen as more of a tuneup for Rodriguez, who plans to fight a guy who is more of a known commodity in the division if he were to get past Augustama, but he is no push over.

Next Saturday, Willie Nelson (23-1, 13 KO) will face off against hard-punching Vanes Martirosyan. Martirosyan fought to a draw against Erislandy Lara, who is another hard-punching fighter. The concern is about Nelson’s past three bouts, which have shown his defensive vulnerabilities. Is DiBella concerned about Nelson’s chances? “I have never been reluctant to put my guys in harms way,” adds DiBella. “I have never been one to stand in the way of a good fight.”

Willie Nelson wanted this bout for a reason. He wants to prove he can play ball with the big boys and sometimes risks have to be taken in order to impress. This has all the makings of an exciting bout. Furthermore, the winner of this fight is more than likely going to get a title shot in their following bout.

Jermain Taylor will be fighting in his first world championship bout since 2009 against Sam Soliman. It will also be his first 12 round bout since his devastating KO loss to Arthur Abraham, which left him with a brain injury and he did not fight again for nearly two years. Does DiBella have any concerns about Taylor? “Jermain came back for an opportunity,” added DiBella. “Soliman is not a big puncher. He is over 40 years old,” DiBella stated. “Jermain has as good a chance to win the title again as could be put in front of him.”

DiBella is dedicated to delivering fantastic Broadway Boxing events. October is Breast Cancer Awareness Month and there is no other way to raise awareness better, as Heather Hardy will be in the main event.