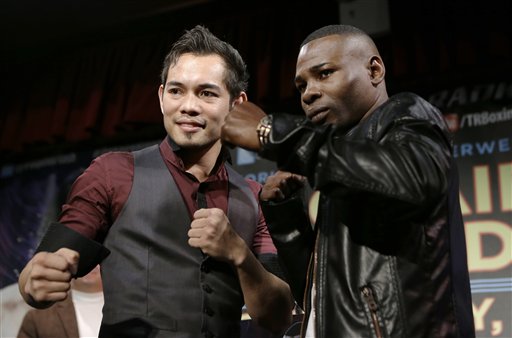 All that was settled today when both participants made it to New York City to officially announce their fight at the press conference. ThaBoxingVoice.com spoke to Donaire regarding the drama behind the testing issues that occurred this week.

Donaire who has volunteered to do VADA testing year round has never made it a stipulation for his opponents to do the same. However for the Rigondeaux situation, it was different.

“They called themselves on it. They said that it’s a bs testing, we don’t care. We’ll take any testing you want as long as you fight me. Well now I’m going to fight you, so grant me what you said you will do. Therefore we negotiated and that was there. It was in the contract. We agreed upon it,” Donaire told ThaBoxingVoice.com.

Rigondeaux has been calling Donaire’s name out ever since he beat Rico Ramos for his world title last year. Donaire has agreed to fight him this time around even if he feels Rigondeaux is undeserving.

“I still think ‘til this day Rigondeaux needs more fights. They called me out and you know what, they want to make the fights happen, so let’s make the fight happen.”

The hardcore boxing fan will say to Donaire that Mathebula is no more deserving than Rigondeaux and that it’s about time he takes this fight. To the fan that says that, Donaire explained, “Just because you’re unknown doesn’t mean you’re nobody. I thought Mathebula was going to give me a hard time because he was tall. I will still say ‘til this day that he can outbox some of these champions out in this weight class.”

Another reason why Mathebula was chosen over Rigondeaux last year Donaire explains that they were just simply easier to negotiation with.

“Rigo’s Popularity? At that time the network was gearing for Rigondeaux. Mathebula was the easier fight to make because he wasn’t asking for too much. These guys think they’re the ish, they’re going to ask for more. He’s getting paid more than he’s ever getting paid in his life for this fight. That’s the reason some fights don’t happen. These guys try to price themselves beyond what they’re supposed to get but we’re here now, so I’m ready.”