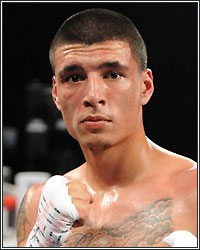 NEW YORK, NY (March 30, 2016) – Roc Nation Sports is pleased to announce that undefeated Dusty Hernandez-Harrison (29-0, 16 KOs) of Washington, D.C. will return to the ring on Friday, May 13 when he takes on Bakersfield, California’s Mike “The Silent Assassin” Dallas Jr. (21-3-1, 10 KOs) in a 10-round welterweight bout at the DC Armory in Washington, D.C. The fight will headline a throne boxing event that will be televised live on BET beginning at 10:00 p.m. ET/PT.

“I am really excited that my 30th fight will take place in Southeast D.C., where I was born and raised,” said Hernandez-Harrison. “It will be great to be back in D.C. where I haven’t fought since 2014, and I can’t wait to put on a show for all the fans in attendance and watching across the nation on BET. Dallas presents an interesting challenge that I am ready to face. I will be getting world class sparring for this bout and will be more than ready for anything he brings to the table on May 13.”

“I’ve heard Dusty is pretty good, but I will be the biggest step up for him by far,” said Dallas Jr. “At 147 pounds, I feel very strong. I’m more mature and more focused. I’m back.”

“All of us at Roc Nation Sports look forward to bringing Dusty Hernandez-Harrison back to fight in front of his hometown fans against Mike Dallas Jr. in the midst of the professional boxing resurgence that is taking place in Washington, D.C.,” said David Itskowitch COO of Boxing for Roc Nation Sports. “Fans in attendance at the DC Armory and those watching across the country on BET have a great night of boxing and entertainment in store for them.”

“BET is excited to once again partner with Roc Nation Sports on our second throne boxing event, positioning BET Networks as a go-to destination for premier live boxing events,” said Stephen G. Hill, President of Programming, BET Networks. “Roc Nation Sports has proven to be an innovator in the entertainment space and as we continue to grow and expand our partnership, BET is thrilled to offer content as diverse as our audience.”

“We are thrilled to welcome Roc Nation Sports and BET to the historic DC Armory” said Erik A. Moses, Senior Vice President and Managing Director at Events DC. “It is certainly another capital moment in D.C., considering the rich history of professional boxing. The nation’s capital is still a fight town and to have the opportunity to showcase that again in the DC Armory is a prodigious honor.”

May 13 will also feature the professional debut of highly touted Philadelphia heavyweight prospect Darmani “Rock Solid” Rock against an opponent to be determined.

“I’m thrilled to be making my pro debut on May 13 at the DC Armory,” said Rock. “My team and I have worked hard and it has all been building up to this moment. I’m looking forward to my rise to the top of the heavyweight division which begins on May 13.”

Mike Dallas Jr. was born into a boxing family and tabbed by experts during his teen years as a future professional star. At age 29, he’s in the midst of a comeback that lands him in Washington, D.C. against local unbeaten favorite Dusty Hernandez-Harrison that may be the most important fight of his life. As an amateur, Dallas shared a ring with current world champions Terence Crawford (whom Dallas claims he beat three times) and Danny Garcia as well as three-time U.S. Olympian Rau’shee Warren. He won multiple national amateur titles and qualified for the 2004 and 2008 Olympic trials. Dallas turned professional on March 20, 2008 against Alejandro Valladares in San Jose, California and won by unanimous decision. He would go unbeaten in his next 17 fights. When he faced Josesito Lopez for the vacant NABF super lightweight title on January 28, 2011 in his national television debut on ESPN at Pechanga Resort and Casino in Temecula, California, he was shockingly stopped in the seventh round. Five months later, Dallas met fellow rising contender Mauricio Herrera. In an excellent fight, again at Pechanga Resort and Casino, Dallas lost by a razor thin majority decision. Despite the setback, Dallas’ performance showed boxing experts he was back to contender status. In his next two fights, Dallas dominated former Miguel Angel Gonzales on February 17, 2012 and knocked out Javier Castro on June 22, 2012 to capture the WBO Latino light welterweight title. Those wins brought Dallas to his biggest opportunity to date, an WBC super lightweight interim world title fight against Lucas Matthysse, on January 26, 2013 at the Hard Rock Hotel and Casino in Las Vegas. Just after negotiations for the fight were finalized, Dallas learned that his father, Mike Dallas Sr., who introduced his son to boxing at age six, passed away suddenly at just 45 years of age. Dallas Jr., however, did not pull out of the Matthysee fight. On fight night, Dallas Jr. was all there physically, but mentally a fight of that magnitude was too much under the circumstances and Matthysee, probably the hardest puncher in boxing, imposed his will on Dallas, scoring a first round knockout. He then took the break he should have taken before the Matthysee fight, spending two years away from the ring. When Dallas felt the urge to fight again, he contacted his trainer Ben Bautista and the pair ventured to Tijuana, Mexico, where Dallas picked up two quick wins against Alejandro Alonso on November 20, 2015 and most recently on December 19 against Odillon Rivera. He now returns to fight in the spotlight again on May 13 in a true crossroads fight against Hernandez-Harrison.

At the age of nineteen, Darmani Rock is already drawing comparisons to former heavyweight greats of the past. Rock has received high praise for his powerful jab and ambidexterity. Standing at 6’4”, he moves with an unparalleled lightness and speed for a fighter his size. Rock earned nation-wide accolades following a banner year in 2014 when he took home the USA Boxing Junior and Youth Open, Youth Continental and Youth World super heavyweight titles. During the 2014 Junior and Youth Open in Reno, Nevada, Rock shut out the 2013 National Youth Champion, John Luna, 3-0. This impressive performance was followed by another super heavyweight title at the Youth Continental Championships in March 2014 in Quito, Ecuador where he defeated Argentina’s Kervin Espinola 3-0. Rock then took home the gold medal at the prestigious World Youth Championships in Bulgaria in April 2014 by a 2-1 decision over Germany’s Peter Kadiru. Rock also took home the 2014 World Junior Amateur Championship and capped off 2014 by being named Philadelphia’s Amateur Boxer of the Year at the annual Briscoe Awards. His most noteworthy win, however, came in May 2015 when he beat Cam Awesome, a career amateur who has been called the next Chris Byrd, in Las Vegas for the National Golden Gloves title. Rock also captured the 2015 U.S. National Amateur super heavyweight championship. He ended his amateur career as the number one rated super heavyweight in the United States (and the number five rated super heavyweight in the world) going 19-5 in national tournaments. In February 2016, Rock signed an exclusive promotional agreement with Roc Nation Sports.

Hernandez-Harrison vs. Dallas, a 10-round welterweight fight which is presented by Roc Nation Sports takes place Friday, May 13, 2016 at the DC Armory in Washington, D.C. This fight headlines a throne boxing event presented by Corona Extra and will be televised live on BET beginning at 10:00 p.m. ET/PT.

In addition to the great action inside the ring, the May 13 edition of throne boxing on BET will feature several notable Roc Nation Sports touches that offer a unique fan experience, including a live musical performance as well as a host and a name DJ to keep the energy at a high level throughout the event.