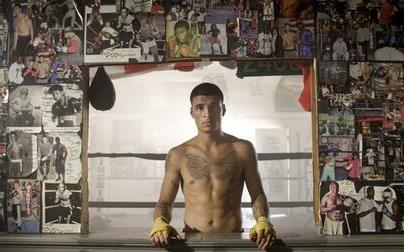 WASHINGTON, D.C. (July 22, 2014)- On July 26, Dusty Hernandez-Harrison will return to the “Mecca of Boxing,” Madison Square Garden, and put his undefeated record on the line when he faces off against hard hitting Wilfredo Acuna (15-14, 12KOs) of Nicaragua. The welterweight bout will take place on the undercard of the “G4” mega event between Gennady Golovkin and Daniel Geale for the WBA “Super Championship” title and IBO Middleweight World Championship live on HBO World Championship Boxing.

Hernandez-Harrison (22-0, 12KOs), the WBC Youth Welterweight Champion who is currently rated WBO No. 15 and WBC No. 21, will be making his second appearance at the famed arena, which may seem like a hometown fight for the Washington, D.C., fighter.

“We sold a lot of tickets to my fans in Washington, D.C.  We have a few buses to bring them to New York. And then with Jeff (Promoter, Jeff Fried of All In Entertainment) from Coney Island and all, it adds a lot of excitement to the fight,” Hernandez-Harrison said. “This is a huge card to be a part of and I will do my best to put on a good performance for everyone in attendance.”

“Acuna is tough, strong and keeps coming; no question about it. We are preparing for the full eight rounds,” said Buddy Harrison, the young fighter’s trainer and father. “These are the kinds of fighters my son needs to face: rough and busy fighters.”

The southpaw, Acuna, went seven rounds with WBO junior welterweight champion, Chris Algieri, in September of 2013 before being stopped due to an eye injury.

This will be the fourth fight of 2014 for the 20-year-old Hernandez-Harrison. Remaining active and being exposed to different looks from a variety of fighters has all been part of Fried’s plan since he started working with the amateur standout in 2012. Hernandez-Harrison has fought all over the country and has been everything from the main event to the opening bout — intentionally designed to give him a range of distinct, in-ring experiences.

“It’s a big stage and the perfect setting for Dusty to showcase his skills and show why he is widely viewed as the best young welterweight prospect in the world,” Fried said. “Facing fighters like Acuna, who is a rugged southpaw and active in the ring is part of developing a future World Champion,” he added.

“I just want to thank Jeff Fried, Tom Loeffler, Antonio Leonard and Gary Shaw for allowing me to be part of this historical event,” Hernandez-Harrison added.