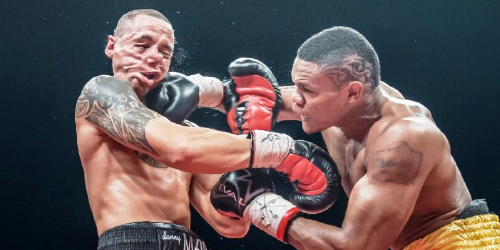 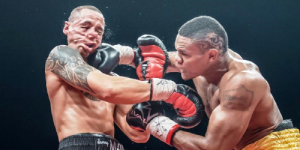 Khomitsky started the fight strong. Even though Blackwell was landing the cleaner punches, Komitsky won most of the earlier rounds with a higher punch output. As the fight went on, Blackwell took control of the fight. Blackwell finished strong in the last two rounds. He even managed to stun his 40-year old opponent on two occasions. But the strong finish wasn’t enough to secure the victory for the 23-year old Blackwell.

As has often been the case this year, the little guys stole the show. In a terrific twelve-round fight, Hekkie Budler successfully defended his WBA minimumweight title with an unanimous decision victory over Xiong Zhao Zhong. The judges scored the fight 114-112, 118-108 and 114-112 for Budler. ThaBoxingVoice.com scored the fight 116-110 for the South African.

The fight started explosively. In the second round, Zhong managed to stun his opponent several times and surprisingly knocked Budler down with one minute to go in the round with a great left hook to the temple. Budler, who had never been down before in his career, clearly he didn’t know how to deal with being hurt. Unable to hold his opponent, Budler was getting hit with every punch Zhong has in his arsenal. But
somehow, Budler made it out of the round.

In the third round, Budler regained his composure quickly. After fighting cautiously in the first minute, he started to take control of the fight again. At the end of the round, he landed a terrific overhand right, sending his Chinese opponent down to the canvas.

Although unable to stop his opponent, Budler remained in control of the fight after the third round. In an action-packed fight, Budler showed his superior hand speed and combination punching. He also smartly used his height and reach advantage while using his strong jab. And while Zhong clearly lost the majority of the rounds, he had his moments and was able to land some good counter punches on his
opponent.

With this win, Budler improves his
record to 28-1(9 KO’s). The 26-year old South African is expected to fight the IBF and WBO minimum weight title holder, Francisco Rodriguez Jr., next, in a unification fight.

In a sensational performance, Eleider Alvarez captured the WBC silver light heavyweight title with a seventh round technical stoppage. The referee stopped the fight because of a nasty cut above the right eye of Ryno Liebenberg.

Alvarez was in control from the first bell on. Working behind a very strong jab, he easily outboxed his South African opponent. Alvarez not only landed his left jab at will but also landed some terrific straight right hands and some nasty uppercuts. He also showed some great defensive moves, including the shoulder roll.

After being clearly outclassed throughout the fight, Liebenberg, who looked predictable and limited, got knocked down by a right uppercut from Alvarez. While clearly hurt, Liebenberg managed to beat the count and made it out of the round.

With this win, Alvarez improves his record to 16-0 (9 KO’s). He should now be in line to fight his stablemate, Adonis Stevenson, for the WBC light heavyweight title. Liebenberg suffered his first professional defeat, his record drops to 16-1(11 KO’s).