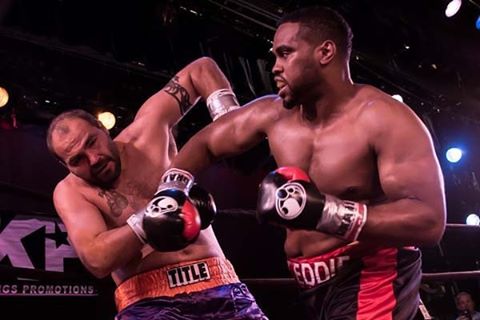 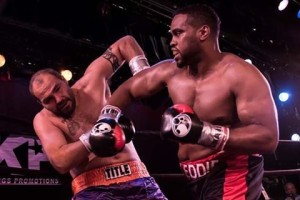 In the first round, Chambers warmed up by countering Brown’s offensive attacks. In the second round, he began cutting off the ring and became more aggressive. Chambers scored a knockdown in the second round after connecting on a pair of overhand rights.

In the third round, he dazed Brown with a barrage of punches and the referee gave Brown a standing count.

A few seconds later, Chambers landed a right hand to Brown’s chin, which dropped Brown to one knee.

The referee stepped in and called the fight off at 1:34 of round 3. In the main event, heavyweight Travis Kauffman defeated Epifanio Mendoza by TKO in round 2.

Eddie Chambers discussed his triumphant return to the ring.

“It’s great to be back in the states, and I’m happy to get win #42. Galen Brown was an opponent with a lot of experience, so I took my time and worked cautiously. I didn’t want to get caught by being careless, but at the same time, I did want to be aggressive with my front foot and land sharp shots. It was great fighting in Atlantic City, in front of some familiar faces. Fighting close to home made being in the ring tonight rather fun. Now that I have my comeback fight out of the way, I’m ready to step up and fight some of the bigger names in the division.

“My boxing resume speaks for itself. A few years ago, I was considered by boxing experts to be one of the most avoided heavyweights in the sport, and there were good reasons for that. I’m a bit heavier now, I’m stronger, my faculties are all there, plus I still possess that same speed and fast hands. I belong right up there with the best in the heavyweight division, and I believe I’ll be able to prove that in the next few months.

“During fight week, I received an incredible amount of positive messages from all over the world, especially from my fans in the states and in the UK. Thank you to Al Haymon, Marshall Kauffman of King’s Promotion, Faded Beard Clothing, PSS Distribution Services, which includes Gary and Kurt Borne, Johnny Ortiz, and Vinny Scala for being a huge part of Team Chambers.”

“Overall, I was pleased with Eddie’s performance, taking into consideration that it has been almost a year since his last fight. In the first round, Eddie played to the crowd a little too much, but he tightened that up in the second round. He displayed many of the things we worked on in training camp. The quality work he received from his sparring partners during camp transferred to his performance in the fight. He dropped Brown in the second round, had him hurt, and then in round three, he stopped him.”

Eddie is one of the best boxers in the sport in any weight class. He has good power; he is a very accurate puncher, and possesses great defensive ability. He has a great new team around him. All of us are focused on working to see that he gets the respect he deserves this time around. We enjoyed the victory, and we are already working hard in the gym again.

Eddie plans to stay active from now on, and we appreciate everyone’s support. Great things are coming for Team Chambers.”