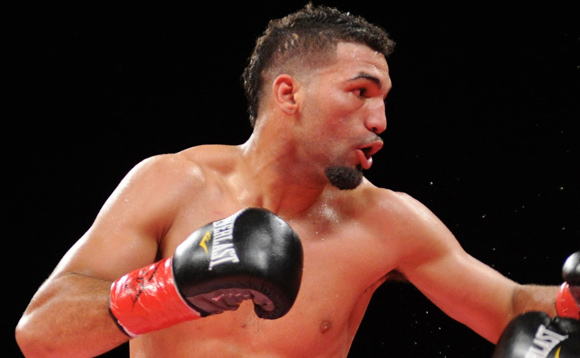 In this interview Edwin Rodriguez explains, that he is not sure if he can make 168 lbs again.  However, he really wants to try to make the super middleweight limit again.  I don’t blame him; the 175 lbs division is a very bad neighborhood, right about now with Stevenson and Kovalev looking scary, as they record victory after victory.  I think that Edwin is approaching his boxing future in a smart and patient manner; he is trying to do what is best for his career and family.

The Boxing Voice explains to him that, “We spoke to Victor Conte yesterday and it’s is his opinion, that you should not be fighting at 168.”  Edwin responds “I am not sure if I am going to fight at 168 or 175 coming up, right now I am enjoying time with my family.  I hired a nutritionist for my off time, because that was a lot of the problem.”  As we all know he failed to make the super middleweight limit, for his fight with Andre Ward last month.  The important thing is that he is making a real effort to address the problem.

The Boxing Voice steers the interview in a different direction, asking him, “How many fights do you have left with Lou DiBella, or are you a free agent now?”  Edwin explains “No I am still with Lou DiBella and Al Haymon of course; Lou has been with me since the beginning of my career and has done right by me. So I enjoy working with Lou and Al Haymon.”  It seems like that relationship has been mutually rewarding to all parties involved.

They close the interview out, by asking him, “Carl Froch vs. George Groves, did you watch that fight? It took place in your division, it was an exciting one, also had some controversy?” Edwin answers the question by saying “I did watch the fight it was a really exciting fight. I thought it was a premature stoppage. I do feel like Carl Froch was going to still end up getting the knockout, later on in the fight.”      Rodriguez comes across as a really nice guy and he seems to have a plan in place.

It sounds like he has learned a lot, from some of the mistakes that he made leading up to his first loss as a professional.  He also expressed interest in fighting Froch or Groves in the future.  Sign me up, I would love to see any one of those two face off against the Dominican power puncher.