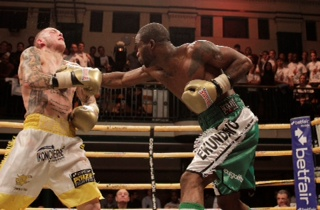 Larry Ekundayo and Glenn Foot meet in the battle of the unbeaten Prizefighter champions at The O2 on October 5, live on Sky Sports – and Ekundayo hopes their battle can be made an eliminator for the British welterweight title.

Ekundayo crashed into contention when he claimed the Prizefighter Light Middleweights III title in November at the York Hall in Bethnal Green after just two professional fights. Two months later, Foot came out on top in a barnstorming night at the Civic Hall in Wolverhampton to lift the trophy in the Welterweights III.

After his Prizefighter success Ekundayo’s promoter Spencer Fearon said his charge would move down to welterweight, and a with a win under his belt at the weight in May, Ekundayo hopes the request for the mouth-watering clash with Foot to be a British title eliminator can be made as the 31 year old continues his quest to make up for lost time.

“It would be brilliant if it was an eliminator for the British title,” said Ekundayo. “Right now, just for the fact that we have the fight, I am buzzing. A lot of people are already debating it on the internet; Glenn Foot’s fans and my fans are discussing it. It shows it is a big match up domestically.

“The first time I saw him was in Prizefighter. He was quality that night, he is a quality fighter, and he worked really hard and deserved to win.

“It is the biggest fight of my career so far. If you call yourself a fighter you cannot duck other fighters. One of us has to lose and that person will have to deal with that. This is the sort of fight I look forward to and people know that there are no shortcuts – since I turned pro last year, apart from my debut, I haven’t fought a guy coming to lose. There is no point messing about.

“The first time I went to The O2 was for Carl Froch’s win over Mikkel Kessler and the atmosphere was incredible. I cannot believe that I will be fighting in that arena. I want to see a big thanks to Eddie Hearn for putting my name on this show, it is a huge show. This is just my seventh fight and I am in action at The O2, what more could I ask for?”