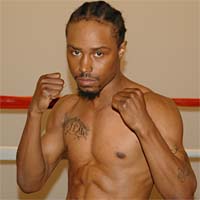 Eric Hunter (18-3, 9 KOs) isn’t a well known name in the world of boxing but he hopes to change that when he fights on the Bernard Hopkins vs Sergey Kovalev under-card this Saturday night. The 28-year-old American featherweight is looking to steal the show, on perhaps 2014’s most eagerly anticipated night inside the square ring. “I think I am going to steal the show, I’m always looking to steal the show, (I’m the) best dressed, (with the) best style, and (I’m) going to show-out,” explained Hunter before admitting he doesn’t know anything about his opponent on the night ,William Gonzalez (27-5, 23 KOs). This didn’t seem to concern the Philly fighter, “(I) just worry about me, I get myself in the best shape possible, and be alert on everything that he does.”

Although Hunter seemed genuine that he didn’t know about his opponent, you would assume he would’ve been made aware that he was a southpaw, with a fairly impressive knockout percentage (72%). Other than that, much like Hunter, Gonzalez is also very little known and will no doubt share similar ambitions on the night. The 33-year-old from Nicaragua is well traveled, having fought several times in the states already, as well as in Mexico, Costa Rica, Panama, and of course his home country but for both fighters this will be by far their biggest night and whilst it’s great to have dreams, we all know that no matter what happens in the main event, whether it be Hopkins winning via a decision or Kovalev by knockout, it will be the biggest story on the night and the one everyone cares about. However, if Eric Hunter can put on a really good show, he will get the attention from some of those watching and hopefully put his name in the minds of boxing fans around the world, on the stage that he feels he rightfully belongs.