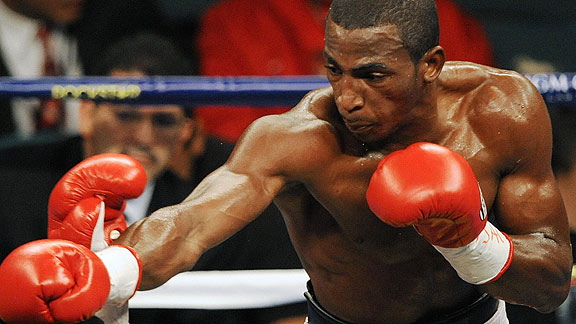 I recently had a chance to ask Erislandy Lara some questions about his upcoming WBC final elimination fight against Vanes Martirosyan on November 10th. We spoke on detail on his fight with Martirosyan, Canelo Alvarez, his current views on the rest of the division, including all the current champions, and what holds for his future. Lara will go into this fight with only 19 professional fights, but he has a wealthy past of amateur fights which include a World Amateur Championship in 2005 and a Central American and Caribbean Games Championship in 2006. He was able to defect from Cuba on his 2nd attempt in 2008. His only blemishes are a majority draw against Carlos Molina and controversial majority decision loss to Paul Williams, a fight that most people thought he won, but we’ll get to that later.

The 29 year old Lara comes into this fight 17-1-1 with 11 KOs, while Vanes comes in with a record of 32-0 with 20 KOs, so we started right off talking about Vanes. I asked him if there was anything that Martirosyan does that scares him, like his power. Lara responded, “Nothing. You have to be prepared for all fighters because any man with two hands is dangerous, but nothing I see he does better than me.” Then I asked what he thinks he can take advantage of against him, but he was good at keeping his game plan, as he only said, “Lots of things I see. You’ll have to find out on NOV 10!” I asked if this just another step for him or a statement fight and he stated, “I’m going to make a statement. I want to punish this kid!”

Next up, I asked him about the possibility of finally getting the Canelo Alvarez fight, asking him if he wins this fight if he still wants a fight against him, surprisingly, he didn’t jump at it. Lara said, “When I beat Vanes I’m ready for anyone. Can’t keep chasing chickens, he will always find away to get around me, but I expect the WBC to force him to fight me.” So then I asked him straight out if he thinks Canelo is afraid of him, he responded, “100%. What do you think? If not then fight me. If you’re better you win. It’s simple. Give the fans what they’re asking for. It’s all about the fans!”

In a subject related to Alvarez, I wanted to know what he felt about all the champions at 154 lbs. He responded, “There protected. Every single one of them fight hand-picked guys and aren’t willing to fight the best. That’s not being a champion.” Excluding himself, this is how Lara ranks the top 3 fighters at 154, “Mayweather one, two and three.” Lastly, I asked what he thinks he does as good, or better, than anyone in the division and he stated, “Everything! Most importantly I know I train harder than anyone in the division. Speed, power, movement, conditioning, being a southpaw, I know I have the best skills in the division.”

I decided to get into Cuban fighters and why they seem to not be big PPV draws, yet they are considered the best amateur boxers in the world. Lara responded, “Very few fighters are PPV sellers, Mayweather, Pacman, and Cotto, out of active fighters. So it’s just not the Cubans, you have to beat a lot of guys and perform to get to that stage and I will be the first Cuban to make it to that point.” While we were on the subject of PPVs, I asked him his opinion on the upcoming Miguel Cotto vs. Austin Trout fight in December. “I think Cotto will break him down and stop him late. Not sure if Trout is prepared for that type of fight, but let’s see how it plays out”, said Lara.

I do personally believe that Erislandy Lara is 1 of the top fighters at 154, but to play devil’s advocate, I asked him to explain to people that might call him overrated because he didn’t win against his 2 best opponents, Carlos Molina and Paul Williams. Lara then said, “Anyone who says I didn’t beat Williams is just a hater. In the Molina fight it was a close fight. I go back and look at the fight and I thought I won 6-4, but soon we will have to fight again and show the world I’m better. You can’t compare the two fights, one fight was a close fight, Molina, and the Williams fight was a one-sided beating I gave him, and no fighter in the world is going to be tougher than Paul Williams.”

Lara seems to be 1 of the most avoided fighters in the sport, especially when it comes to getting the big fight, so I asked him if he continues to get avoided at 154, if he would consider taking a big fight at 160, and he responded with an interesting name. “I will fight anyone! I want to win my first world title at 154, and then move up if necessary, but like I said many of times, I’d love to fight Sergio Martinez. He’s a great fighter and I know I have the tools to beat him,” said Lara.

The fight on November 10th should be a good exciting fight. Then, whether it’s a fight against Canelo Alvarez, Sergio Martinez, or anyone else, Erislandy Lara is willing and ready to take on anyone. Now the question is who will step up to the challenge? Right now we are between a rock and a hard place and something has got to give. The sport needs more PPV stars outside of the big 3-4 guys and Lara is more than ready to nominate himself to step up and fill that void.