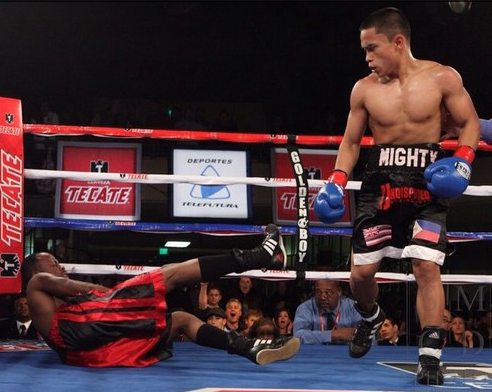 The long journey to finding respect from the boxing world for Bruno Escalante may be coming to an end on Saturday, December 7th in Redwood City, as the 5’2” Super Featherweight looks to gain his first title. Though not one of the four belts considered the crème de’ la crème (WBO,WBA,IBF and WBC), the IBA Super Featherweight title is no small feat and with it comes the respect of being one of the best in the United States, as well as the allure of bigger fights against the very best in the world.

Escalante, who has been a global traveler going from his birth place of the Philippines to Hawaii to the Bay Area, sees it as a natural progression and evolution to become the fighter he ought to be. Escalante, who has been headlining cards in Redwood City for most of the year has emerged as a full on star over the course of that time by getting into wild fire fights that have the crowd up and enamored with his ability to entertain and come out the victor.

Still even with his success some detractors have questioned when the aggression of Escalante will catch up with him. At Escalante’s very best he uses deceptive footwork and fast hands to put together combinations that end fights. At his lowest he gets into wild exchanges that give his opponent far too much of a chance of landing fight altering punches. It’s truly a Kafka-esque scenario where the same thing that makes Escalante so great also could be the thing that hurts him.

Escalante will face Mike Ruiz Jr., a man he faced twice in the amateurs and split wins. This will be the unofficial trilogy between the two and Ruiz poses some real threats. For starters, Ruiz likes to sit back and attack letting his quick hands harm his foe while he closes the distance. Escalante had some problems in his last fight against Joseph Rios in close, and though Ruiz lacks the physicality of Rios, he does provide unorthodox angles that could be frustrating to anyone.

Ruiz can be at times stagnant, especially as the fight goes longer and he can stop throwing punches. Something Escalante does not do. Escalante’s cardio was best displayed in the July open workout when he sparred for 20 minutes straight with no break as sparring partners came in and out of the ring. For Ruiz, if he is going to win this fight he has to build momentum early as it seems as though his previous history has shown he has not fared well in the deep water so far in his career.

For Escalante, the quiet, thankful and polite man out of Undisputed Boxing Gym in San Carlos, this fight seems like the moment that he has been waiting for his whole life.  Escalante will get the chance to win a title in his hometown in front of fans who have gotten behind him and his fan friendly style.

The weigh-in will take place at the Sports House 3151 Edison Way, Redwood City, 94063 on Friday, December 6 and is free to the public. The official weigh-in time is 4pm.