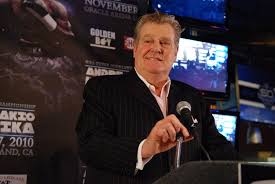 ESPN Statement on the Passing of Boxing Promoter Dan Goossen

Longtime boxing promoter Dan Goossen, of Goossen Promotions, who passed away Monday, promoted six events televised on ESPN networks in 2014 and has been a longtime promoter for ESPN’s boxing coverage. Most notably, Goossen promoted the WBC World Heavyweight Championship between Bermane Stiverne and Chris Arreola on ESPN in May.

“Dan Goossen was an absolute titan in the boxing industry and a great friend to ESPN. He was the mastermind behind bringing the WBC World Heavyweight Championship bout between Bermane Stiverne and Chris Arreola to the masses via ESPN back in May. He will be sorely missed.”