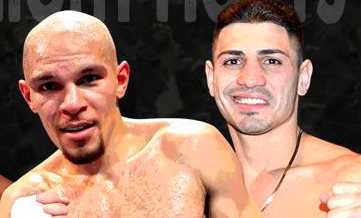 This week’s ESPN2’s Friday Night Fights out of the Minneapolis Convention Center in Minneapolis, MN will feature two action packed fights headlined by an IBF Junior lightweight title eliminator with Rances “Kid Blast” Barthelemy and Fahsai Sakkreerin battling over twelve rounds. The co-feature bout will bring back the always exciting Donovan “Da Bomb” George, squaring off versus Caleb “Golden” Truax in a ten round middleweight attraction.

Cuban defector Rances “Kid Blast” Barthelemy (18-0 11KO’s) is coming off a gift decision against the more than capable Arash Usmanee this past January on another FNF card, in a fight where he was tagged and had to dig deep to make it to the end, “Kid Blast” will fight hard for the number one contender’s spot . Barthelemy will try to prove that his last fight was just a fluke as he tries to dispatch hungry Thai import Fahsai Sakkreerin (39-3-1 21KO’s) who makes his U.S. debut, being more experienced in the number of professional fights, Sakkreerin will have to use his knowledge if he plans to get over his opponent.

The co-main event should be a real barn burner when FNF favorite Donovan “Da Bomb” George (24-3-2 21KO’s) of Chicago, IL bounces back from a draw against David Alonso Lopez to try and create an explosion in the ring. Having been in with some of the better fights of the division and going tit for tat against newly crowned Light Heavyweight champion Adonis Stevenson, George must prove if he’s still on top of his game closer to the middleweight limit against Minnesota’s very own Caleb “Golden” Truax (21-1-1 12KO’s). Truax fights in front of his home town looking not only for a win but for a chance to catapult up the rankings since losing a decision to ex-champ Jermain Taylor in a fight where he put him on the canvas; a win here will eliminate the dreamer and make believers…out of the fans.