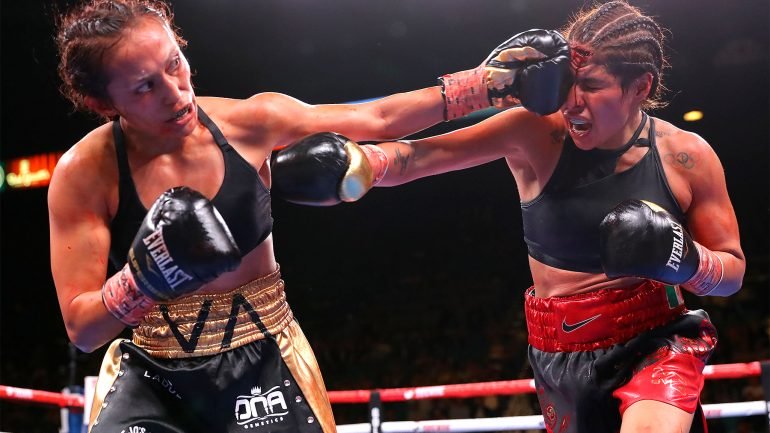 November 2nd was not only the day that that Saul Alvarez and Sergey Kovalev squared off in the ring it was a Mexican holiday. It was the Day of the dead and one fight on the Canelo – Kovalev fight card helped push women’s boxing further away from being dead. That fight took place between Seniesa Estrada and Marlen Esparza.

Estrada and Esparza fought a ten round title fight with three minute rounds. It’s something that’s not new to women’s boxing but it’s not seen that often especially in modern times. It gave both fighters a chance to execute a gameplan instead of just heading into the ring swinging for the fences (which isn’t so bad either). Aside from three minute rounds this was a legit grudge match that was played out on a big stage which I’m sure added fuel to the fire and boy did they deliver.

This was definitely a step in the right direction for women’s boxing in the United States.  After year’s of being downplayed due to a lack of star power (in the United States), lack of knockouts and some different rules  along with some sexism.

The UFC was able to build some stars and market women properly before boxing would begin to do so within this decade and all it took was for women’s boxing to join the Olympics and an American fighter named Claressa Shields to win gold medals in back to back Olympics. Once shields decided to go pro the landscape of women’s boxing changed in the United States but still has a long way to go but this fight seems like it is a key step to moving forward and the future of the sport.