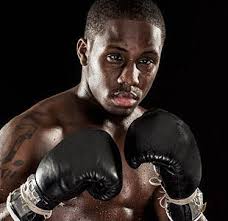 In 2012, Tevin Farmer was seen as nothing more than a tough Philly fighter, someone that promoters would put in as a B-side against one of their promising up-and-comers. Farmer was 7-4-1 and coming off a loss to highly regarded Olympian Jose Pedraza on ShoBox: The New Generation.

Farmer took the fight against Pedraza, now a top-rated undefeated contender, on short notice, something that he’d already become accustomed to in his short career. Following the defeat, Farmer made a firm decision to refocus himself on his training methods and his craft. He was going to put everything he had into the sport that he so dearly loved, and give himself a real “fighting” chance.

Fast forward exactly two years later and Farmer has seen his career completely turn around. He has scored nine consecutive victories, including dominant and unanimous decisions over previously undefeated foes Camilo Perez (9-0) and his most recent and most impressive win to date over the exalted Emanuel Gonzalez (14-0).

Farmer returns to action this Saturday night in an eight-round feature bout against Dominic Coca at the ABC Sports Complex in Springfield, VA, and will be doing so with the backing of promotional powerhouse DiBella Entertainment now in his corner. Farmer signed an exclusive promotional contract with DBE earlier this month and will be looking to show the world that he is in fact one of the best 130lb. fighters in boxing.

“I am both honored and excited to now be promoted by Lou (DiBella),” said Farmer. “He is one of the top promoters in the world and I couldn’t be more excited about joining the DiBella Entertainment roster. This is a huge opportunity for me and my career. I understand that I have a big job ahead of me, but I am well-equipped to take advantage of any and every opportunity that Lou presents to me and show the boxing world that I am one of the elite fighters in my division.”

“I first saw Tevin Farmer when he had a record of 7-4-1 and lost to my great prospect Jose Pedraza. Most fighters never turn it around at that point. I subsequently saw him on numerous occasions and could not believe the improvement. In his victory against Manny Gonzalez, he actually reminded me of Pernell Whitaker. His work ethic and character are amazing and he has a terrific manager. He is now 16-4-1 and truly has a chance to become a world champion. I am very excited about this signing and the four losses mean nothing to me,” said Lou DiBella.

An impressive performance is expected out of Farmer on Saturday night, and big things are in store for the Philadelphia-native in 2015.