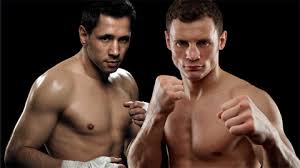 Felix Sturm and Robert Stieglitz have fought each other to a draw tonight in the Porsche Arena in Stuttgart, Germany. In one of the better fights of the year, all three judges saw a different outcome of the fight. The official scores were 115-113 Sturm, 115-113 Stieglitz and 114-114. ThaBoxingVoice.com scored the fight 116-113 in favor of Sturm.

Sturm started the fight sensationally. While the first round was close, he completely dominated the second and the third. Sturm was able to land dazzling combinations in the middle of the ring and even managed to stun Stieglitz on several occasions.

After taking a breather in the fourth, the first round ThaBoxingVoice.com gave to Stieglitz, Sturm picked up the pace again in the fifth. This time it were his uppercuts that were making the difference in the round.

The sixth round started where the fifth ended, with Sturm landing some terrific uppercuts. The 35-year German was also very successful with right hook counters, which he landed at will every time Stieglitz tried to rush in.

From the seventh round on, the fight started to turn around. Sturm wasn’t able to throw enough punches anymore to keep his opponent off him. Stieglitz, who was very busy throughout the fight, had more and more succes with his activity and was able to pin his opponent on the ropes multiple times.

Stieglitz continued his attacks in the eight and ninth round. However it was not really the case of Stieglitz doing anything different, it was once again Sturm who gave control of the fight away with his inactivity. While he was never in trouble, Sturm was walked in to the ropes where Stieglitz was able to land some good and hard shots.

In the tenth, Sturm was cut from an unintentional head but. Stieglitz went after his wounded prey and started a ferocious attack. Sturm, who was unable to stay away from Stieglitz punches, had no choice but the fight back.

A brawl broke out, which started half-way the tenth round and ended at the end of the eleventh. In a round with terrific back-and-forth action, both fighters were able to stun each other in the eleventh.

Sturm clearly took over the round in the last 30 seconds. With the crowd, who was clearly on the side of Sturm, going nuts, Sturm landed one great shot after another.

Both fighter were clearly tired at the start of the twelfth. Stieglitz, who seemed to be down on the scorecards, tried to knock Sturm out. But he was unsuccessful in his efforts. Sturm dominated the last two minutes and sealed the fight for most ringside observers.

But as earlier pointed out, the judges saw it differently.

Sturm was throughout his career notoriously known for getting controversial decision in his home-country. However, since leaving German promotor Universum and starting his own promotional company, he has not been able to get the nod in any close fight.

In the eyes of many, Sturm defeated Daniel Geale and Sam Soliman in their first encounter. But in both fights, the traveling fighter won the fight. Tonight, Sturm again didn’t get a decision in a fight where he probably should have gotten it.

Did Sturm piss off the boxing gods in Germany when he started his own promotional company?

On the undercard, Susi Kentikian successfully defended her WBA flyweight title in a competitive and entertaining fight. The 27-year old fighter from Germany won a unanimous decision victory over Naoka Fujioka.

Also on the undercard, German heavyweight Steffen Kretschmann scored a fourth round stoppage over David Gegeshidze.