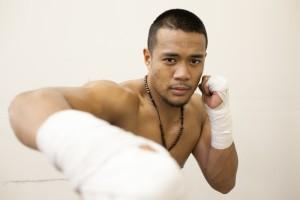 Joel “The Quiet Storm”Siapno (0-1) faces career definition in only his second professional fight. The Herb Stone managed fighter came into his July bout with Jesus Sanchez as the a-side (promoter’s fighter) as well as with a lot of hype. In the end, it was an odd sequence of events that lead to a debut loss.

Siapno and head coach Arvin Jugarap of The Kennel Boxing Gym in San Leandro, CA explained that the layout for the venue was a bit confusing as the locker rooms were actually in a building adjacent to the Longshoremen’s Hall in San Francisco, CA. Once they found the locker rooms, Siapno was informed he had roughly 20 minutes to get ready. Essentially Siapno had his hands wrapped in his first professional bout and then headed straight to the ring, the first bout of the night and the only fight before the live televised Fox Sports 1 portion of the card with a full crowd.

Siapno looked nervous at first and dare I say showing a bit of the minimal amateur pedigree as some of his punches winged in as opposed to a straight arrow to the target. Sanchez, also a debuting pro appeared much better than anyone thought as he stayed composed throwing straight punches and countering Siapno’s powerful bursts. In essence, the first round was a scoring nightmare as it was a overused expression in boxing of one fighter, Siapno, landing harder, but Sanchez staying busier. In essence, pick your poison on how to score it, but it was not clear.

The second round was when the dread filled the building. Siapno who started the round strong with a pawing jab and pulling back quickly trying to set up the ring hand came in a bit wide on one exchange. Sanchez landed a left hook that appeared unpleasant to Siapno that forced him to take his first steps back in a round he was clearly controlling. A bizarre moment ensued as Siapno and Sanchez would exchange in a bit of a wild exchange with nothing landing then it happened.

After a missed left hook by Jesus Sanchez to Siapno, Sanchez appeared to push Siapno to the ground as the ref began counting. It was simply strange as the ref was looking directly at the incident while it occurred and ruled it a knockdown even though it was fairly obviously a slip. The crowd began to boo and the onlookers simply confused to how this was scored as Jugarap appeared close to even standing on the apron voice his displeasure.

Siapno would go on and win the next two rounds in the four round fight, but drop a split decision to Jesus Sanchez with the knockdown being the major determining factor. For Siapno, this is a August 22nd is a chance for redemption as Jesus Sanchez has accepted the fight making for a very interesting rematch at the club level and also showing that Sanchez believes that his win was also no fluke.

On Instagram, Siapno stated his case for training hard for this fight as he captioned a ten mile jog with “I know my opponent knows he lost the last fight, so I have to train extra hard for this one.”The tension is arising as rarely do you see an interesting rematch in both fighters second bout.

To see Joel Siapno vs. Jesus Sanchez on the undercard of Avila vs. Frias on Fox Sports 1 at The Allan Witt Sports Center in Fairfield, CA please visit PacoPresentsBoxing.com. Doors open at 5:30 p.m. PT and the first fight begins at 6:00 p.m. PT. The FOX Sports 1 and FOX Deportes broadcast airs live at 10:00 p.m. ET/7:00 p.m. PT.