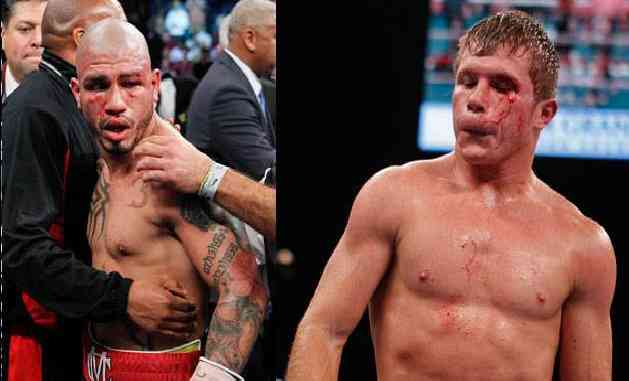 Last weekend we saw arguably the fight of the year so far when WBO Lightweight Champion Terence Crawford defeated “the Cyclone of Guantanamo” Yuriorkis Gamboa in front of a lively crowd in Nebraska.  The coming out party for Crawford was yet another high in what has so far been a tremendous year for the sport. Here are 10 other fights I would love to see in the not too distant future
Floyd Mayweather Vs. Manny Pacquiao
Let’s get the most obvious one out of the way first! It’s criminal that a fight, both hardcore and casual fans have been screaming out to happen for over half a decade still looks unlikely, but until it happens, talk of this fight will never go away.  It’s looking like Floyd will give a rematch to Marcos Maidana on September 13th and then we can only pray that the former “pretty boy”, who calls himself “Money” will go for what would without a doubt be the biggest pay day of his career and the biggest fight this century against the Filipino.
Amir Khan Vs. Adrien Broner
Let’s make one thing clear, despite being involved in some exciting bouts, Britain’s Olympic silver medallist has not done anything near enough to warrant a big pay-day against Floyd Mayweather.  He has never attempted to avenge his three losses and if Floyd thinks that fighting Khan in the UK would do anywhere near the Froch/Groves II numbers at Wembley he is more delusional than even his biggest haters think. Khan does not have a huge fan base in the UK but he is involved in exciting fights and Adrian Broner is a big name who would fancy his chances against the self proclaimed “King” Khan.
Danny Garcia Vs. Lamont Peterson
Nobody wants to see undefeated Danny Garcia face off against Rod Salka (who???) in August, we wouldn’t however mind watching Danny Starch Lamont Peterson though, who fights on the same card.
Carl Froch Vs. Julio Cesar Chavez Jr.
Carl Froch has had a great career, with the exception of the sublimely talented Andre Ward, he has defeated everyone he has faced and deserves the chance to fulfil his dream of fighting in Vegas. The perfect opponent for him in the Sin City would surely be Julio Cesar Chavez Jr., not only would the popular Mexican produce decent PPV sales, I believe, stylistically this could be a classic, neither guy is particularly fast, they both have defensive flaws but granite chins and they can both bang!
George Groves Vs. James DeGale II
The first fight wasn’t as exciting as anticipated but it was close and both fighters now have more experience and fame, meaning the rematch would do good numbers between the two London fighters whose bad blood is well documented.
Andre Ward Vs. Gennady Golovkin
Universally recognized as boxing’s number 2 Pound for Pound fighter, Undefeated Andre Ward has fallen victim to his own abilities, similar to Roy Jones in the 90s, he is just too good for any of his opponents which can make his fights seem dull. However, the much feared, body punching GGG is also undefeated, with a 89.65% knock out percentage. He would of course have to move up a division but I’m sure he wouldn’t mind doing so.
Deontay Wilder Vs. Tyson Fury
For the first time in a decade the heavyweight division finally has a little bit of life again, and no fighters are more exciting then these two, both undefeated, with crazy power in either fist but neither has faced any real competition, so it’s only right that these two face off. Whilst this fight might not make either man instantly rich, it would open the door for the winner to face the ageing, long reigning champion Wladimir Klitschko.
Guillermo Rigondeux Vs. Vasyl Lomanchenko
Similar to Andre Ward in the Super Middleweight division, dominant boxer Guillermo Rigondeaux is in need of a worthy opponent, many will believe that Ukranian Vasyl Lomanchenko would not be ready to face the True Champion of the Junior Featherweight division but those same people probably argued that he wasn’t ready to fight for a World Title against previously undefeated Gary Russell Jr.
Terence Crawford Vs. Mikey Garcia
It was obvious watching his recent stock-rising, demolition of Yuriorkis Gamboa that Terrance Crawford will naturally progress to the Junior Welterweight division but hopefully he can stick around the 135lb division long enough for Super Featherweight king Mikey Garcia to make the move up to the Lightweight division for what could be an epic battle.
Canelo Alvarez Vs. Miguel Cotto
Not many people, including myself, gave Miguel Cotto much chance against Sergio Martinez but despite Martinez obvious decline and long inactivity, that fight has to go down as the best performance of Miguel’s career! he is once again one of the sports biggest names and if Canelo can win his 50/50 match up with Erislandy Lara on July 12th, Then surely all roads will lead to a fight between Mexico and Puerto-Rico’s most popular pugilists.
Tweet