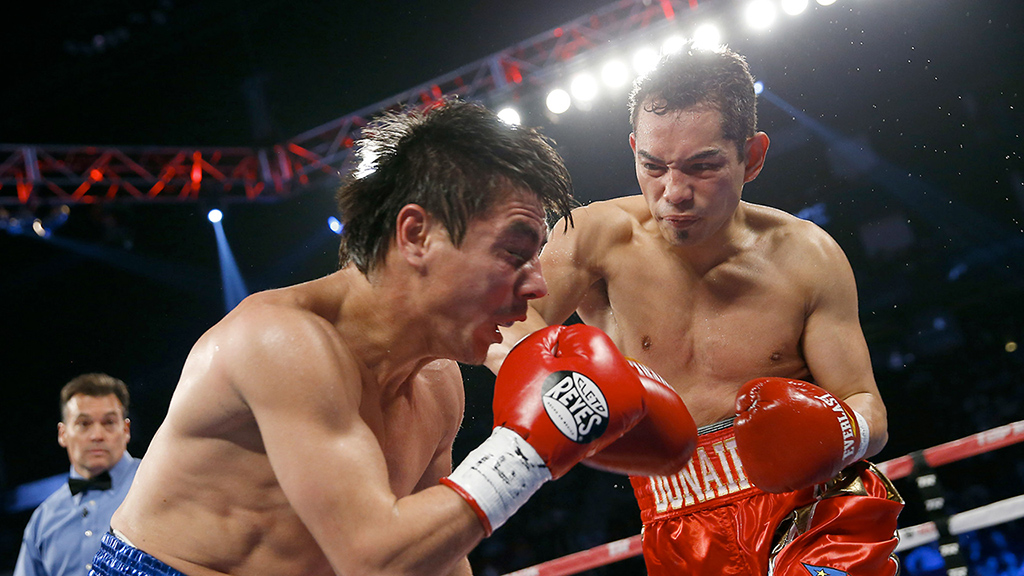 Picking fighter of the year is as subjective as anyone’s pound for pound list. This year it was a mixture of quality, quantity, and a stand at what’s becoming the biggest problem in boxing, performance enhancing drugs. ThaBoxingVoice.com’s 2012 pick for fighter of the year goes to the ‘Filipino Flash’, Nonito Donaire.

In an era where most of the top level prizefighters fight twice a year, Donaire had what would be as close to a throwback fighter’s schedule fighting for times this year, on premium cable at that. It should be no surprise to anyone that he’s already scheduling his return for the first quarter of 2013 with Abner Mares, Guillermo Rigondeaux, and even Chris John being eyed for his next opponents. While the mixture of his opponents names don’t have the it appeal as an Abner Mares does on his resume, Donaire beat quality fighters in the 122 division and pretty much dominated each of his 4 opponents this year.

He started the year winning a lopsided decision against former title holder Wilfredo Vasquez, Jr, dropping him in the 9th and picking up the vacant 122 lb. WBO title in his first fight since leaving the bantamweight ranks. He followed up that performance with another dominating decision winning the IBF Super Bantamweight title over Jeffrey Mathebula, scoring a knockdown in the 4th round against the taller South African in route to another lopsided decision.

In October of this year, he took on what was known to be the consensus number 1 Super Bantamweight in Toshiaki Nishioka. Again, Donaire put on a decisive performance knocking down the Japanese fighter in rounds 6 and 9, en route to a 9th round TKO.

Would his resume have been more glamorous had he took on an Abner Mares or everyone’s favorite amateur Guillermo Rigondeaux? Certainly, but there’s no denying that 3 of his 4 opponents in 2012 were all ranked in the top 10 of the division. There’s also no denying all 3 of those opponents were reluctant to open up and came more to survive than actually win. Except, when they did or gave Donaire a minor opening; he took advantage of it and knocked them all down evening garnering a stoppage over Nishioka.

In his final fight, he got the complete opposite style of opponent when he took on Mexican banger Jorge Arce. Donaire-Arce was supposed to happen earlier this year but didn’t because of Arce’s-no contest decision in his fight against Jesus Rojas in June. Arce would serve to be Donaire’s biggest payday and most crowd-pleasing performance in the smallest amount of time. Donaire earned 1 million dollars this past December knocking down Arce a total of 3 times before earning a KO victory in round 3, making him 4-0 in 2012 with 2 KO’s, retiring Nishioka and Arce in the process.

The quantity and the quality are all there. Now if you add in that Donaire is the only boxer to submit to 24/7 random Olympic style doping tests administered by VADA, that only adds to the accolades. Donaire welcomes his opponents to also join in the process but does not require them to do when fighting him. In a year where drugs have raised suspicions in the world of boxing, Donaire raises his own bar to be the only boxer to prove he’s clean with the results to back them. In just a week after The Philippines saw their idol Manny Pacquiao knocked out cold by Juan Manuel Marquez in a cloud of performance enhancing drug controversy, Donaire showed his Filipino fans and others around the world why you should root for him inside and outside the ring.

Danny Garcia:  In 2012, Garcia went from being a good basic fighter, to contender to world title holder, to one of Golden Boy’s brightest and youngest stars. In March of this year, he won his first world title defeating the legend Erik Morales. Although Morales was an older, overweight, faded version of himself, he was still the best opposition the young Garcia had ever faced. Garcia grinded out a decision victory, knocking down Morales in the 11th, and winning the WBC 140 lb title.

Then came quite possibly the second most oh sh*t moment of the year. Garcia was thrown in against highly favored UK star Amir Khan in a unification match with the Ring Magazine title on the line, along with Garcia’s WBC title and Khan’s WBA title. Garcia was sort of a replacement opponent after Khan’s rematch with Lamont Peterson was cancelled due to Peterson’s positive test for performance enhancing drugs.

Garcia, a huge underdog withstood a fast start from Khan where he pretty much was being dominated in the 1st two rounds even though Garcia stood in the pocket and was having some success landing on Khan. Then came the third round, where Garcia landed a monstrous left hook that sent Khan to the ground like a falling tree and left us saying oh sh*t and wow. Khan showed heart trying to fight back and survived the 3rd round. It was much of the same in the 4th, Khan still trying to fight with his legs gone, and Garcia being patient looking to land more big shots while not punching himself out. The result was two more knockdowns for Garcia, a stoppage, and the birth of a new star in the unified 140 lb champion Danny Garcia.

Garcia might have been fighter of the year had he not had to take a rematch with Erik Morales and fought someone else. The rematch opened up the brand new Barclays Center in Brooklyn for boxing. The rematch was also marred with controversy as Morales had tested positive for a banned substance but the New York State athletic commissions decided to sanction the fight anyway. Morales took a beating at the hands of Garcia. Garcia landing his signature left hook sent Morales turning like a helicopter in round 4 earning Garcia a KO victory successfully defending his titles.

Robert Guerrero: 2012 was a breakout year for Gilroy’s own Robert Guerrero. While most of his story in the past revolved around his wife’s fight and survival of leukemia, 2012 was a year where Guerrero made his story in the ring. After a long lay-off, he returned to the ring this year jumping up two weight classes from 135 to 147.  In his first fight, he out pointed rugged Turkish fighter Selcuk Aydin to win the vacant WBC interim welterweight title, almost seemingly making him the mandatory to Floyd Mayweather, Jr., who holds the regular title.

In his second fight of the year, Guerrero took on Andre Berto this past November. Guerrero brought the fight to Berto knocking him down in the 1st and 2nd rounds. It was an action fight that garnered some consideration for fight of the year. Guerrero took some punches but dished out more as he closed both of Berto’s eyes en route to another decision victory quite possibly landing him a fight he’s always wanted, Floyd Mayweather Jr.

Brian Viloria: Had this award been over a 12 month span, it might have been all Viloria’s. In December of last year, he showed total domination of one of boxing’s best lower weight bangers in Giovanni Segura. Segura was fresh off dominating one of the best lower weight fighters of our time in Ivan Calderon, twice. He followed that win up with a TKO victory avenging one of his losses against Omar Romero.

A showdown with another excellent lower weight banger Hernan Marquez loomed. In what still is appalling to most as to why this fight wasn’t picked up by either major network, it delivered regardless. Viloria and Marquez went at it through 10 rounds with Viloria getting the better of Marquez dropping him down in rounds 1,5, and 10, with the bout ending in a 10th knockdown.

Juan Manuel Marquez– Marquez hands down took the number one oh sh*t moment of the boxing year with his one punch knockout of Manny Pacquiao. While Pacquiao was his only quality win of the two he had this year, that one quality victory puts him in the discussion for fighter of the year. While not many people were too thrilled with seeing act four of Pacquiao-Marquez, it certainly did what a fight between these 2 normally do, deliver drama, inside and outside the ring. 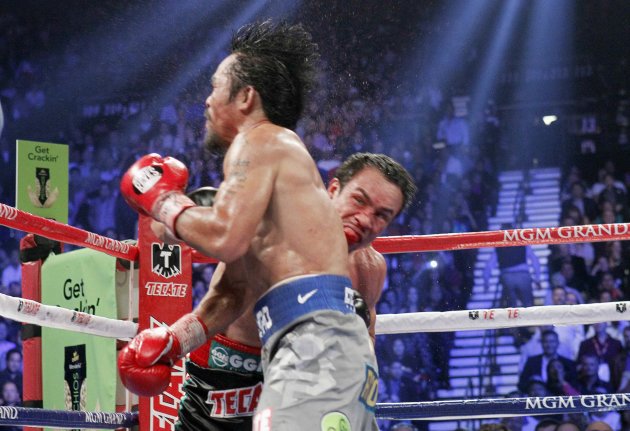 Marquez’ new physique had come under question last year during Pacquiao-Marquez 3, when it was discovered that his new strength and conditioning coach, Angel ‘Memo’ Heredia had a history of dabbling in the world of performance enhancing drugs. The carry over led to this fight with shots being fired back and forth from both camps and with no additional testing outside of the Nevada testing taking place.

Inside the ring, it was just as entertaining. Manny Pacquiao looked like he was in old form with his movement, combination punching, and tenacity. Then in round 3, Marquez landed a massive right hand that knocked Pacquiao down for the first time in this rivalry. Pacquiao stormed back stunning and knocking down Marquez in the 5th, bloodying his nose. When it looked like Marquez was about to be stopped, he did what he knew best, fought back.

It was much of the same in the sixth until the punch heard round the world took place. With the round about to end and another round seemingly Pacquiao’s, Manny jumped throwing a right, Marquez slipped it, landed a huge right hand of his own, and the rest is history. It was oh sh*t, wow, and anything else you could think of, rolled into one. The one punch ending of Pacquiao’s night was redemption for Marquez who felt like he won all of the past 3 fights and could not leave it to the judges.