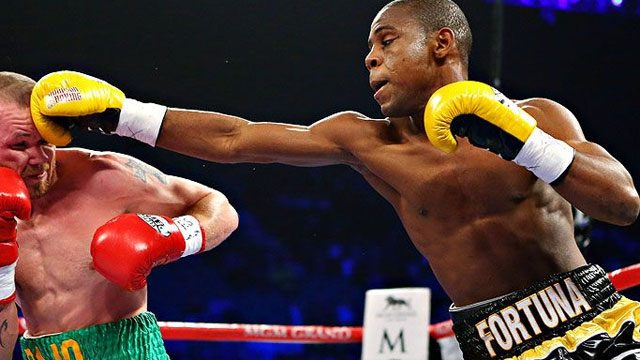 On a red hot edition of ESPN2’s Friday Night Fights, an explosion is bound to occur as featherweight sensation Javier “El Abejon” Fortuna (22-0 16KO’s) faces off against ex-Olympian Luis “La Estrella” Franco (11-1 7KO’s) in the main event. The supporting bout on this card taking place out of the Buffalo Run Casino in Miami, OK is a fight between former welterweight champion Kermit “The Killer” Cintron (33-5-2 28KO’s) versus Jonathan Batista (14-1 7KO’s) in a 10 round welterweight match up. The main event possibly contains a future star while the co-feature has a fighter looking to keep his star alive as he looks for one last title run.

Coming off of a devastating first round knockout win over Miguel Zamudio in his last fight, Fortuna is slowly becoming one of the top fighters in the 126lb division and a win over Franco would just further cement this claim. Looking to take the Dominican fighter’s “O” is former Cuban Olympian Luis Franco who in his last fight almost a year ago, lost a split decision Mauricio Munoz who recently challenged for the IBF title. This fight has so many directions it could go, knowing the pedigree of a fighter like Franco, it would be hard to imagine he would get blasted out quickly by the hard hitting Fortuna, but that’s just what Fortuna is saying he’s going to do. To really become a star and an A-class fighter at 126 or 130, “El Abejon” must prove that he’s just as good as his handlers say he is and blast Franco back in to what seemed like an early retirement. Expect this fight to be both tactical and lightning fast as both men can carry a high work rate, if Franco can’t throw non-stop while making Fortuna over think his next step, then we might have an upset; but if Fortuna takes him out early, then he might just be steps from the top.

With wins and losses shared with some of the top fighters of recent memory and of today, Kermit Cintron is once again trying to reinvent himself at 147lbs and so far it hasn’t been as glorious as it was 8 years ago at that weight. Coming off a split draw in a fight that could’ve easily went in Adrian Granados direction, Cintron really has to step his game up and show the tenacity and power he once exhibited so many years ago. In the ring across from the known fighter, relatively unknown Jonathan Batista of the Dominican Republic is itching for the change to put the Puerto Rican’s lights out in only his second fight away from home. With just one loss on his record against Emmanuel Lartey just four months ago, Batista has rebounded with a quick knockout win and looks to keep busy on what will be his first nationally televised bout. Not much could be said in favor of Batista’s case other than he has seemed to do alright for himself in his native country, but a lot can be said for and against Cintron who at times doesn’t seem 100% focused while in the ring. There are two Cintrons that could show up, “The Killer” who knocked out Walter Matthysse in spectacular fashion (YouTube it!) or the man who wasn’t busy enough against Carlos Molina, we honestly just have two unknowns going in to a fight that could eventually become a stepping stone for one of the fighters.