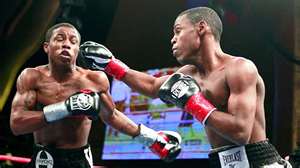 The MGM Grand Hotel in Las Vegas is a venue steeped in boxing history.

Another chapter will be added to its great story come Saturday 8th December as Top Rank Promotions rolls out 2 of the boxing world’s biggest hitters as Juan Manuel Marquez takes on Boxing Writers Association Fighter Of The Decade Manny Pacquiao, in the duo’s 4th encounter. Manny is currently ahead, albeit controversially 2 1 so far.

These two pound for pound legends will be the Main Event Fight on a night in which Top Rank has also lined up an undercard title match up.

The MGM Ring is no stranger to fantastic featherweights stepping through its ropes (it hosted Morales v Barrera 2 and 3, the latter being named as Ring Magazines Fight of the Year 2004).

Before the Main Event, the WBA interim Featherweight Title will be up for grabs as 2 unbeaten warriors will do battle. Irelands Patrick ‘The Punisher’ Hyland will attempt to derail Dominican Republic sensation Javier Fortuna.

Hyland currently the Irish Featherweight Champion hailing from Dublin is bidding to win his 28th contest in succession. The slick orthodox boxer has a pro record of 27 and 0, with 12ko’s to his name. The Irishman, although fully aware of the task that awaits him come the 8th, is unfazed and rolls into The Grand with serious momentum. His last opponent, Carlos Fulgencio (a previous Abner Mares victim) lost a unanimous 8 round decision to ‘The Punisher’, and had to take a referees count on 3 separate occasions during the bout.

In many ways this could be regarded as Hyland’s ‘break through’ fight. However first, he has to solve the difficult puzzle of taking Javier Fortuna’s zero away from him. Fortuna though, has his own agenda, and that’s leaving The Grand with the gold as he puts his own unblemished record on the line.

Huge hitting Javier is very much the featherweight divisions ‘man on the rise’. Trained by Pablo Sarmiento (who also happens to train Sergio Martinez), Fortuna is a southpaw with tremendous punching power. Since turning pro in 09,he has amassed an impressive 20 wins out of 20 contests, scoring 15 knockouts in the process, and at just 23,looks to have a huge future in front of him. He also comes into this contest on the back of an impressive 2nd round KO over experienced campaigner Cristobal Cruz.

The stage is now set for a fascinating Featherweight battle on the undercard of a historic Main Event, as Hyland and Fortuna will trade blows under the bright lights of The MGM, in a bid for gold, and the prestige of still remaining unbeaten by the time the lights dim. Somebodies ‘0’ has got to go.