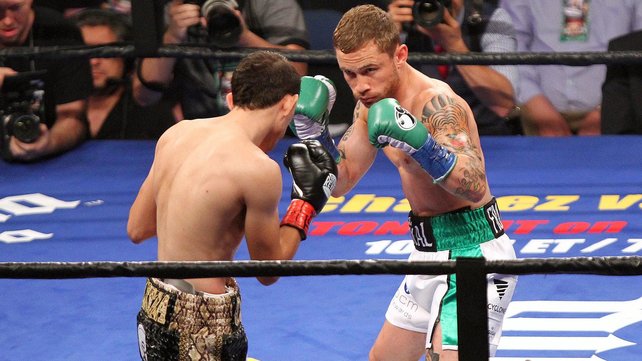 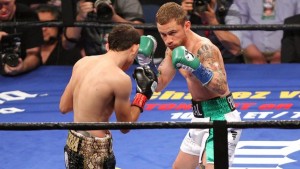 El Paso, Texas (July 18) – Undefeated Irish star Carl “The Jackal” Frampton (21-0, 14 KO’s) showed massive heart and determination, as he successfully defended his junior featherweight title against Alejandro Gonzalez Jr. (25-2-2, 15 KO’s) at the Don Haskins Center in El Paso and live on PBC on CBS. Fighting in his U.S. debut. Frampton was knocked down twice in the first round, but bounced back in impressive fashion to win via unanimous decision (116-108 twice and 115-109).

Gonzalez Jr. came out swinging and hit Frampton with a hard straight left jab less than a minute into the fight, sending the Northern Ireland-native to the canvas for the first time in his career. Frampton was knocked down again with less than 15 seconds left in the first when Gonzalez hit Frampton with a sharp right hand behind his ear. Gonzalez was deducted a point in the third round for a low blow and again in the 11th.

“The Jackal” lived up to the lofty expectations of his U.S. debut by throwing and landing 100 more punches than Gonzalez Jr., including nearly triple the amount of jabs. Gonzalez Jr., threw more power punches, however, Frampton was more accurate with his power shots.

“I didn’t feel great in the first round. I got up from two flash knockdowns though and recovered well. The kid could punch very well,” said Frampton. “The ring canvas was very soft. I couldn’t get up on my toes and that’s my best attribute. I got up and showed courage. I came back and won most of the rounds and gave excitement.

“I wanted to win by knockout. It didn’t happen. I’m disappointed, but I’ll re-evaluate and move on; onwards and upwards. He hit me low so many times, but you’ve got to deal with that and carry on and that’s what I did.”

“I definitely won the fight, I was much more effective,” said Gonzalez. “I want a rematch and I’m happy to do it in his hometown. I’ll take whatever fights are best for me either at 118 or 122.”

“The ref overreacted to the low blows, I was just doing my body work,” Gonzalez continued. “I’m not a dirty fighter; I play by the rules and this was disappointing. He’s a good fighter but I’m the best he’s ever faced.”

In the opening bout of the telecast, Arreola prepared to make a statement that he was ready for another world title shot, yet was unable to deliver the performance he had hoped due to Kassi’s solid game plan and heavy-hitting fists. The scores were 96-94 for Arreola and 95-95 (twice).

“It was a good decision. It was just a tough fight,” said Arreola. “Fred came to fight and he’s a survivor. He held right, he moved right. He came here with a good strategy and he got a draw out of it.

“I know if I get Deontay (Wilder), I’d be in much better shape and a lot better prepared. Not that I wasn’t prepared for Kassi, but he came here with a good fight and was prepared.”

Kassi did not take anything away from Arreola, but clearly felt that he won the bout.

“I’m not happy with the decision,” said Kassi. “I feel that I won every round of the fight. I showed tonight I was the better fighter. I take nothing away from Chris. I’ve been his friend for years. People don’t know me, so I just wanted to show the world I could do it. I proved that I belong in the heavyweight division. I showed my heart. I’ve been training hard for many years and I showed it tonight.”