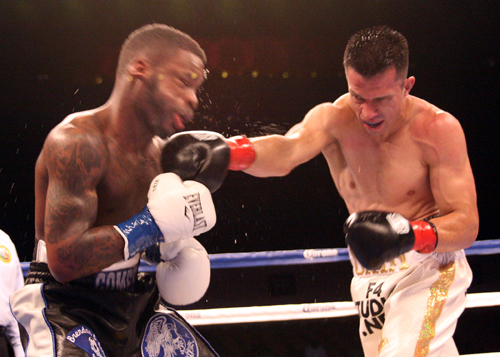 Photos By Will Trillo

Promoter Gary Shaw feels Santana is ready to take on the top contenders in the welterweight division after his recent win.

“Santana is a very determined fighter who proved he’s got the talent to compete against the top level opposition in the welterweight division.” said Gary Shaw. “He came into the Gomez fight as an underdog and showed the boxing world that he’s not playing around.  He wants to fight anyone in the top ten of any sanctioning organization.  I’m going to do my part and continue to keep him busy.  I believe with a few more victories he’ll be ready to fight for a title.”

Santana, who is currently riding an 8-fight winning streak, believes he can become a world champion, if given the opportunity.  His recent victory is a good indication he’s on the right path.

“Gomez was running his mouth, saying I wasn’t that good, but I did my talking in the ring and took his “0” away.” Santana said.  “I know I can be a world champion if I keep winning fights.  I’m going to work my way up the rankings and earn it the old fashion way by kicking ass.  All I want is an opportunity to show the world I’m championship material. I know my promoter Gary Shaw believes in me so I’m going to work extra hard to keep getting better and earn my shot.”