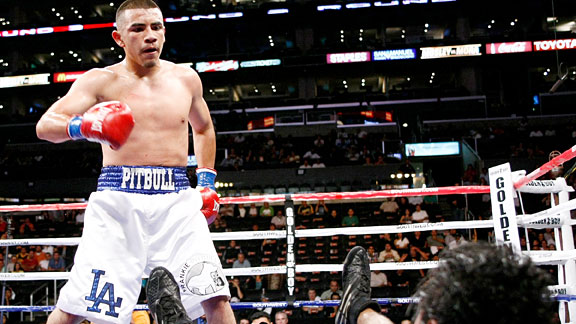 Great boxing prospects are a dime a dozen. Every year there is a new crop; before we know it they’re gone.  Often they have a lot of talent but few actually coalesce into a complete fighter.  21 year old Frankie “Pitbull”  Gomez (15 – 0 11 KOs) is one of these fighters.  He has taken on the title of prospect, but can he move forward and become a contender?

Gomez is a product of East Los Angeles, the same place that gave us Oscar De La Hoya. So it’s no wonder that when he was ready to turn pro he was signed to De La Hoya’s promotional company Golden Boy. Gomez is no stranger to the life inside the ring. Boxing since he was eight years old, he boasts an impressive 120-8 amateur record.  He has won the Golden Gloves and is a National Amateur Champion.  In Gomez’ first year as a pro he had 7 fights, 6 of which ended in knockouts. Currently Gomez is being trained by five time trainer of the year, Freddie Roach and at one point was under the tutelage of Abel Sanchez.

Gomez has shown good poise in his arsenal of talents.  In his last three fights he has stepped up his level of opposition. Last year he fought Manuel Leyva. Leyva, a fighter with a 21-8 record was sparked out by Gomez in three rounds. One month later on the Khan vs. Molina undercard, Gomez knocked out Pavel Miranda in one round. In Gomez’ last fight, he squared up against Lanard Lane. Early in the fight Gomez was clearly trying to shine. He displayed great speed, on top of the power the fans already knew he possessed. For most of the fight he was relaxed and even got into quite a few exchanges with Lane, which Lane had issues dealing with.  Gomez had Lane hurt a few times but could not seem to put him away.  Still he won the fight convincingly in a 10 round unanimous decision.

Gomez’ biggest test to date will be his upcoming bout with Welterweight gatekeeper DeMarcus “Chop Chop” Corley. If you give a quick skim through Gomez’ current resume, no fighters will have Corley’s name recognition. Corley has been in the ring with Mayweather, Cotto, Judah, Maidana and Alexander, just to name a few. Corley, 39 years old, wants to show the world he still has a lot left in the tank. He is no stranger to losing but with 17 years of pro fighting experience, he will teach the young buck a thing or two about being in a ring at the elite level.

On July 20th at the Fantasy Springs Casino in Indio, California, Gomez will have 10 rounds to show what he’s worth. Gomez has a fan friendly fighting style— combination punching, head movement,  power in both hands, and a willingness to exchange.  It’s also hard to imagine that a fighter that has been trained by Sanchez and Roach can fall short of expectations but until Gomez is tested, the jury is still out. He undoubtedly has a great amateur record but all too often that is not enough to get through the rigors of the ring at the elite level.