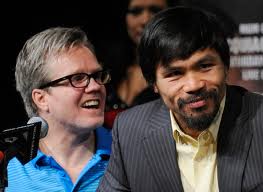 There have been many questions from the boxing public regarding whether or not Chris Algieri is a worthy challenger for Manny Pacquiao. Those questions will be answered come November 22nd as the two Top Rank promoted fighters square off for Pacquiao’s WBO welterweight title on HBO PPV, live from the Venetian Resort in Macao, China.

We will know whether Algieri was a formidable opponent all along depending on the outcome of the match as well as the competitiveness. Regardless of the outcome, some will still speculate over whether or not Algieri deserved the fight in the first place, even if he wins.

Algieri, a significant draw on the East Coast, is coming into the bout as a relatively unknown fighter to the majority of casual fans. This will definitely hinder PPV numbers, not to mention the event’s location.

On this week’s media call for Pacquiao-Algieri, Freddie Roach made comments regarding Pacquiao’s sparring sessions for this camp, and those comments seem to indicate that Roach himself is questioning Algieri’s worthiness.

The lead sparring partner for Pacquiao is junior welterweight contender Viktor Postol, and according to Roach he has been a tremendous asset for Pacquiao.

“Postol is a very good fighter and a very difficult fighter, he’s taller than Algieri and has a lot better stamina than Algieri. I think we got the best sparring partners we could possibly get for the fight,” Roach said to members of the media.

Roach alleges that Pacquiao is getting well-rounded sparring with Postol, and not just for the sake of getting into shape physically, but the kind of sparring that is testing Pacquiao’s mind as well.

“[Postol] is very smart. I see Manny having a little trouble with him and it’s more of a thinking match out there. He really makes Manny think and that’s something Algieri will do, also. That’s what we’re getting ready for.”

At one point during Roach’s response to the question of whether he thought the sparring Manny was getting would end up being a better challenge than the actual fight with Algieri, Bob Arum inserted himself into the mix to prevent Roach from possibly saying anything that would hamper potential PPV buys.

Roach doesn’t want to call any more attention to the fact that many feel Pacquiao-Algieri isn’t worth a PPV premium. But if Roach believes that Postol is the better fighter then that is simply how he feels and he could be right.

Algieri could end up being a star in the future and years from now we may not even remember the doubt surrounding this fight with Pacquiao. In the end, Algieri could be a victim of being on the big stage a little too soon. And years from now, we could be calling for Postol to receive a big name opponent. The difference between the two could come down to timing.

However, Roach has obviously seen something in Postol and only time will tell if he was right about the quality of opposition Pacquiao has in front of him right now.

“Postol is number one contender, Algieri is a world champion, they’re both great fighters and sometimes the truth hurts.”