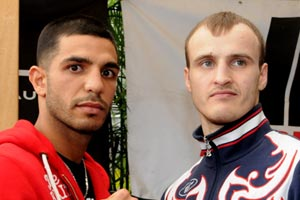 Last week on ESPN’s Friday Night Fights, fight fans got to see Lamont Peterson defeat Kendal Holt to retain his IBF Light Welterweight title. This week, they are treated to another championship bout as, the Aussie; Billy “The Kid” Dib defends his IBF Featherweight title against Evgeny Gradovich at the MGM Grand in Connecticut.  Anytime you get to see a champion defend his belt on national TV it’s a good thing for the boxers, the fans, and most importantly, the sport.

Billy Dib (35-1 with 21 KOs) is a very good, confident fighter that has not lost since 2008. He comes into this fight on a 13 fight winning streak, with only 3 of them going the distance. However, his opponents leave a lot to desire, as his toughest opponent was Eduardo Escobedo, a fight in which Dib did make Escobedo fail to come out the corner at the end of the 6th. This will be his 1st fight under 50 Cent’s SMS Promotions and he hopes that he will be able to get him better fights and get his name more out there in the media. Dib was originally supposed to square off against Luis Franco until he inexplicably pulled out the fight and retired. It will be interesting to see where Dib goes after this fight because I personally don’t see him facing a Mikey Garcia or even an Orlando Salido next, but he will definitely be looking to upgrade his fight opponents.

Speaking of his opponents, Evgeny Gradovich (15-0 with 8 KOs) is a 26 year old Russian that is in the range of top 40 ranked featherweights in the world, just to give you a perspective, Dib is ranked top 5. This fight will give the young fighter a chance to not only shove his name up the rankings, but also win a title. Thus far, he has not faced any tough competition at all and he goes from facing unranked opponents to top 5 in the division, on short notice, so this could be a possible shell shocking fight for the young Russian. His best opponent was Francisco Leal, a Mexican fighter who was 16-5-3 and ranked just around the borderline of the top 100 featherweights in the world. However, we all know boxing is 1 punch away from being a below average guy to all of a sudden a competent fighter, so Gradovich will be looking to do just that.

I feel this fight could be very similar to the Delvin Rodriguez fight, except it will probably be a worse beating. Unless this one ends up being a HUGE shocker, Dib should control this fight from beginning to probably a quick end. Dib has been a pro for 9 years, has 37 bouts, and has shown his skills against, not great, but much better opponents than Gradovich, who has been a pro for not even 3 years, only had 15 fights, is coming in on short notice, and hasn’t face any competition of note at all.

I expect this to be over fast and for Dib to try to make the most of out a bad situation. I’m going with Dib by 4th round stoppage by the ref and he should definitely be showing the class gap between the 2. Hopefully this will lead to bigger things for Dib. I’m not giving this kid much of a chance, but who knows, what were the odds on Buster Douglas? Enjoy the fights.