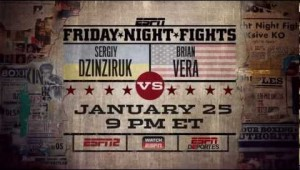 Tomorrow night, fight fans get the pleasure of seeing a former light middleweight champion as Serhiy Dzinziruk, WBO light middleweight champion for almost 6 years, squares off against Brian Vera in the middleweight division. Also on the undercard will be up and coming Canadian, the undefeated Tony Luis facing off against Jose Hernandez in the junior welterweight division. Neither of these fights are title fights, you’ll see that on Saturday, but Dzinziruk was a solid professional fighter that just happened to run in to 1 of the best fighters of the last 10 years, in Sergio Martinez.

Serhiy Dzinziruk (37-1-1 with 24 KOs) is a technician who likes to get inside,jab,  pound the body, and end fights fast. He was at his best 7 years ago when he beat Daniel Santos by unanimous decision to win the WBO light middleweight title. He held that belt for over 5 years beating fighters such as Lukas Konecny and Joel Julio. He then decided to move up to middleweight to face top 5 pound for pound fighter Sergio Martinez and was knocked down 5 times before it was mercilessly ended in 8. His next fight was a draw against a fighter we saw on Friday Night Fights 3 weeks ago in Jonathan Gonzalez.

Brian Vera (21-6 with 12 KOs) is a journeyman fighter that has his best wins against Sergio Mora twice, and that isn’t saying much. Other than that, he has gotten beaten by anyone he’s tried to step up against. Vera is actually coming in to this fight as the higher ranked fighter, but that’s just because he is more comfortable at 160. Even though Dzinziruk has not been the same at middleweight as he was as a light middleweight, I don’t think Vera is good enough to beat him, he has to prove me wrong. I’m going with Dzinziruk by unanimous decision.

Before the main event above, 2  young 25 year olds will battle as Tony Luis (15-0 with 7 KOs) faces Jose Hernandez (13-6-1 with 5 KOs). Neither 1 of these fighters has shown enough power in their previous fights to think that this one will not go the distance. Tony Luis has shown some technical skill in his few fights, but he has faced no one thus far of any substance. Jose Hernandez has also not faced anyone thus far of any substance, but he has lost to a third of them. Because of this, I’m going to have to go with the fighter who hasn’t lost yet and pick Luis. Just for kicks, since he’s stopped his last 4 opponents, as horrible as they have been, I’m picking him to win by 7 rd TKO.

Most true boxing fans will watch these fights no matter what I say, but I think this will give some casual fans something good to watch on what maybe a very snowy day if you’re in the northeast. Neither of these fights above will get too much hype, but they should get everyone warmed up for the big fight on Saturday, featuring, in my opinion, the best 140 lb fighter in the division today, Lucas Matthysse. However, before we get to that, these 2 fights should give boxing fans a glimpse of the past and possibly a look in to the future, enjoy the fights.