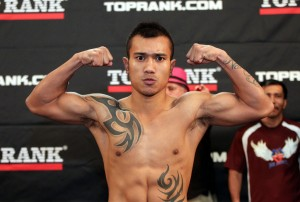 Top lightweight contender Mercito “No Mercy” Gesta returns to the Bay Area when he headlines the Friday, July 18 edition of FOX Sports 1 and FOX Deportes’ Golden Boy Live! in a 10-round bout against Luis “El Vampiro” Arceo at Long Shoremen’s Hall in San Francisco. In the co-main event, San Francisco’s own Jonathan “El Carismatico” Chicas looks to extend his five-fight winning streak against Emanuel “Renegade” Robles and highly touted Chinese heavyweight Taishan will make his professional debut against Ronny Hale in the 4 round televised opening bout.

Gesta vs. Arceo, a 10-round lightweight bout, is presented by Golden Boy Promotions, Don Chargin Productions and Paco Presents and is sponsored by Corona and O’Reilly Auto Parts. Doors open at 6:00 p.m. with the first bell sounding at 6:30 p.m. The FOX Sports 1 and FOX Deportes broadcast airs live at 10:00 p.m. ET/7:00 p.m. PT.

A Cebu, Philippines native, Mercito “No Mercy” Gesta (27-1-1, 15 KOs) started 2014 off in impressive style scoring an eight-round technical knockout win over Edgar Riovalle in his adopted hometown of San Diego in April. Now taking his gloves up north to face Arceo, the 26-year-old southpaw is ready to make a statement as he returns to San Francisco for the first time since 2011. Gesta will look to continue his way back into the lightweight title picture after a suffering the lone loss of his career in 2012 to IBF Lightweight World Champion Miguel Vazquez.

Tijuana’s Luis “El Vampiro” Arceo (28-12-4, 19 KOs) is as tough as they come, a veteran of nearly 14 years, who has faced fighters such as Josesito Lopez, Anthony Peterson, Urbano Antillon and Jose Armando Santa Cruz. Showing that he still has what it takes to fight and beat the best, the 35-year-old has won five of his last six fights landing him a shot in this nationally televised bout against Gesta.

Twenty-five-year-old junior welterweight prospect Jonathan “El Carismatico” Chicas (13-1, 6 KOs) is an impressive talent with a large fan following in his hometown of San Francisco. Currently sporting a five fight-winning streak that includes wins against veterans Rogelio Castenada Jr. and Adolfo Landeros, Chicas is looking forward to introducing himself to viewers around the nation this July.

Southpaw Emanuel “Renegade” Robles (10-0-1, 3 KOs) looks to continue his undefeated streak when he faces Chicas in their eight-round July bout. Coming off of an impressive defeat over Yordenis Ugas, the slick 25-year-old Robles, a native of San Diego, hopes to upset Chicas in his own back yard. Robles seeks to summon the same patience and toughness that helped him edge out Ugas in Febuary.

Just short of seven feet tall, Chinese boxing giant Taishan will make his professional debut on July 18 as well as his United States boxing debut. Hailing from the Taishan Mountains in Southern China, Taishan is also skilled in wrestling, kung fu and kickboxing, but is excited to be making his mark on the professional boxing scene. Known by fans as “the man with the knockout punch,” Taishan will look to live up to that name when he faces Ronny Hale (2-7, 2 KOs) of Montgomery, AL.

Also in action on July 18 will be some of the Bay Area’s finest fighters, including San Francisco’s Ricardo Pinell, a southpaw middleweight with an impressive 8-1-1, 6 KOs record will face Santiago Perez(12-4-2 3KOs). San Jose’s unbeaten Andy “The Shark” Vences (7-0, 3 KOs) will be in action as well as light welterweight Arturo Quintero (15-4-1, 9 KOs) who faces Dominic Coca (8-8 2KOs). Hayward’s featherweight Benjamin Briceno (3-1) will face a very tough Walter Mlechor Santibanes (4-2 2KOs) who is riding a tough fight two KO streak. Undisputed Boxing Gym fighting out of San Carlos’ Fabian Melendez will make his pro debut against Payton Boyea (0-4) at cruiserweight. The Kenell Boxing Gym’s Filipino phenom light middleweight Joel Siapno of San Leandro will also make his debut against Jesus Sanchez (0-0). It is rumored also that a battle of two lightweight womens boxers was recently added to the card as Laura Deanovic (1-5) will possibley face Celene Roman (3-1-2).