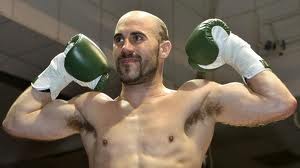 Gary ‘Spike’ O’Sullivan has vowed to KO Anthony Fitzgerald in front of his bitter rivals own fans when the clash at The 3Arena in Dublin on November 15, live on Sky Sports.

O’Sullivan and Fitzgerald finally get the chance to settle a rivalry that has been brewing for years, and after Fitzgerald told O’Sullivan he’d ‘annihilate’ him in his home town, Spike has hit back saying he will put his ‘jealous’ opponent to bed.

“I am going to embarrass him in front of his fans,” said O’Sullivan. “He’s been talking a lot of trash and I am going to put him in his place.

“I don’t consider us to have history, it’s him really – he’s been a bit jealous over the past few years as I have been getting places that he hasn’t been. I think he has been trying to live off my name and then when the fight has been close to happening, it doesn’t happen. It’s going to happen now though so that’s all that really matters.

“Personally, I have no grudge with him, he’s just a guy that is in my way and I am going to get past him.”

With Matthew Macklin challenging WBC International champion Jorge Sebastian Heiland at the top of the bill in a World title eliminator and Andy Lee tackling Matt Korobov for the vacant WBO crown, the Middleweight scene is buzzing in Ireland and the Celtic Rebel believes a big win against Fitzgerald will put him in line for a big fight at the start of 2015.

“I want to fight more regularly and hopefully after I knock Anthony out, I would like to look at landing a big fight,” said O’Sullivan. “Stylistically I think a fight between Matthew Macklin and I would be great for the fans. Eddie Hearn is talking about coming back to Dublin next spring and that’d be a huge night. Matthew is a great fighter, great guy and a good ambassador for the sport, but his style suits me and I’ve always been confident that I would beat him.”

Fitzgerald and O’Sullivan’s grudge match is part of a fantastic line-up of action in Dublin, topped by Macklin’s clash with Heiland.