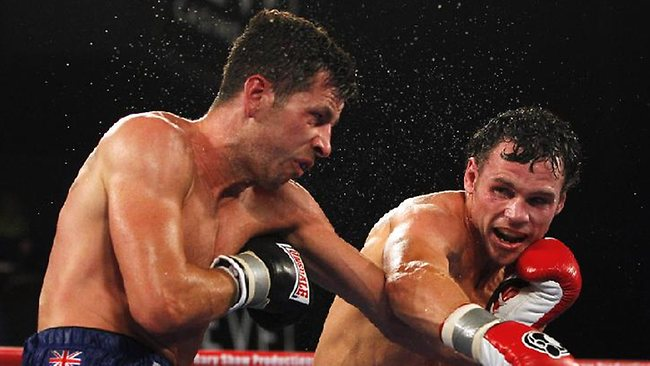 It would’ve worked out well if Daniel Geale pulled off the victory this weekend in his IBF middleweight title defense. Instead, he ended up on the bad side of a split-decision loss to Darren Barker in what was a highly spirited and closely fought contest.

A win would’ve theoretically positioned Geale in the driver seat to face lineal champ Sergio Martinez, however he appears to be in a much bleaker situation. It now seems as though Geale will have to regain his momentum by defeating a couple of opponents in a deep weight class, a daunting task depending on the opposition and there are fewer weak choices in the top 10.

But I have an alternative idea seeing as how Geale was both entertaining and competitive. I believe Geale should just get the shot at Martinez after all.

I know, to the loser shouldn’t go the spoils and because it happens so often in boxing we as fans shouldn’t enable the hypocrisy we usually complain about, but this can be the exception when you consider the situation. Looking at both Geale’s performance and Martinez’s lack of realistic choices in opponents you can arrive at the inevitable conclusion.

First, Martinez has lost the luster he once embodied, making him a bit vulnerable as a smaller fighter in a 160lb division that possesses simultaneously big and talented competitors. I don’t know how competitive he’ll be from now on and getting in the ring with big guys puts him at an immediate disadvantage before the fight even begins. Let’s look at the realistic choices.

“Kid Chocolate” fights on another network, so he’s out, although I think that would be a terrific fight. Gennady Golovkin is an obvious fan favorite matchup, but is the fight ready and how many fans are really demanding Golovkin? Sure he is known and in demand for those that know him, but at this point his allure far surpasses his recognition. Golovkin is no more a big fight to casual fans than Barker, Macklin, or Murray were when they got their opportunity.

Plus, Martinez has been in some grueling fights and continues to fight the stiffest competition. If he doesn’t want to fight Golovkin within the next year he shouldn’t be forced to, he’s earned that much.

I don’t particularly like the Chavez Jr. rematch because I fall into that category of fans that believe 1 compelling round out of 11 doesn’t merit a rematch. At the same time, I can see why it is viable.

I think Murray is the most deserving considering I fall into the category of fans that believe he beat Martinez that night in Argentina. But an immediate rematch isn’t necessary.

With this latest victory under his belt, Barker has made a case for a rematch with Martinez, although I don’t think it is really enough and he needs to get another significant win before tangling with Martinez for the second time. Simply put, if Martinez is going to fight a rematch next I think Barker deserves it the least.

Geale on the other hand provides Martinez with a fresh matchup and he isn’t as big as some of the qualified aforementioned. I think the most compelling reason is the way that Geale fought and the symmetries he shares with Martinez himself. Geale kept a tremendous pace, showed tremendous heart by motoring through the exhaustion, offered up different angles, and even fought with his hands down during portions of the fight. These are all associated with Martinez’s style.

So I propose this: Golovkin-Barker and Martinez-Geale in a mini tournament. Every single outcome is desirable. If the winner bracket produces Martinez-Golovkin then the fight might finally get the much needed traction. If Barker wins then he would most definitely deserve a Martinez rematch after having defeated the division’s top 2 fighters not named Martinez, especially if one of them is the monster known as Golovkin. And who wouldn’t want to see Barker-Geale 2?

With Martinez still recovering from multiple injuries, Geale could get a rebound win with plenty of time to make a Martinez fight. Assuming Golovkin makes easy work of his next opponent it would be safe to say a fight with Barker could happen before Martinez’s next fight.

If the networks and sanctioning bodies are going to continue their chaotic and senseless means of matchmaking, at least continue the trend when it could actually benefit the fans.