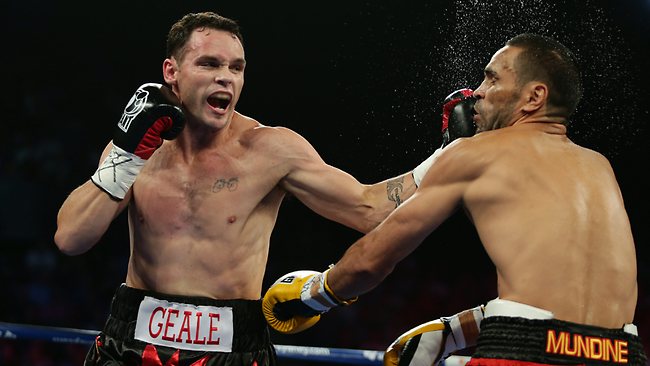 Daniel Geale, fresh off of his redemption victory over Anthony Mundine, is looking to stay active and shoot for his next big option which is a possible showdown between himself and monster middleweight Gennady Golovkin. The division is stacked and as a belt holder Geale has options, but the demand for certain fights over others is apparent.

Geale had been focusing his attentions on his Australian showdown with Mundine, but his unanimous decision victory over Mundine should close that door for the foreseeable future.  Geale had even made comments last year about his desire to fight on US soil and with Golovkin’s win over Gabriel Rosado he’s become a more popular figure in the US.

“I came over to the US after my Sturm win and I showed my interests in the Martinez-Chavez winner, it doesn’t look like that’s going to happen in the near future. Golovkin is definitely a fight that I want, I’ve been talking to my promoter Gary Shaw and everything looks good, but for me it’s one fight at a time,” Geale said.

Geale had a mandatory due against Golovkin before he opted not to fight and relinquish his title, making Golovkin the full champion. While that fight would best suit the middleweight agenda, the overall landscape of the division makes it possible for other competitive and lucrative bouts.

“I want to keep busy, I want to fight the best fighters and make the best fights. Because the division is so strong you know that where ever I go in my next fight it’s going to be a big one.”