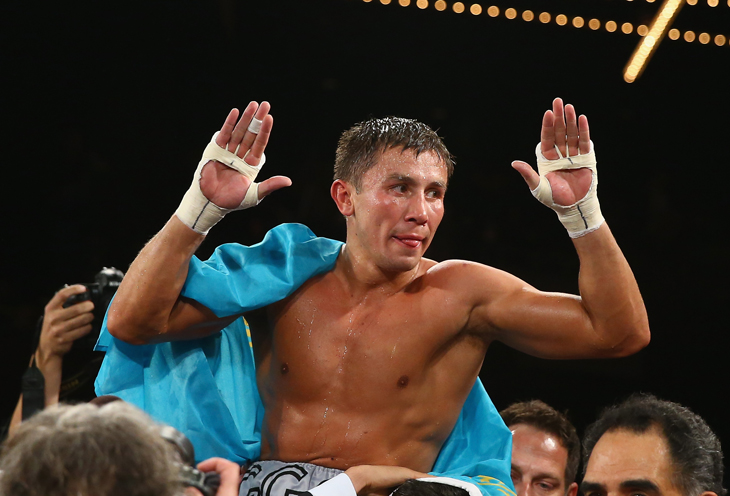 What I find fascinating in the aftermath of the demolition of Kell Brook at the hands of Gennady Golovkin is the proverbial elephant in the room, was Golovkin exposed? Already the most polarizing man in boxing, Saturday’s performance versus Kell Brook has only widened the gap in the opinion of Golovkin amongst fans.

On one hand, you have Golovkin supporters who say, “how can a guy be exposed after finishing off a good fighter in five rounds?” Some supporters of Golovkin have gone as far to say that Golovkin intentionally looked lackluster in order to lure fighters into thinking he’s now beatable. Then you have the detractors, who now stand and screech from the rooftops saying, “see, I told you he wasn’t that good.”

With lines drawn in regards to an opinion about Golovkin, I’ve always found myself somewhere in the middle. I’m the guy who would tell you that Golovkin may be one of the greatest fighters to ever birth the earth, however, his resume stinks and he’s essentially beaten no one at this point. That said, with all the passion surrounding Golovkin, I will try to be as unbiased as possible in my assessment of what we saw this past Saturday.

What’s not to be lost in the conversation is what happened in the ring; a complete obliteration of a good fighter, albeit it at 147, that never stood a chance. It was clear in the first round we would not be witnessing a historical upset, rather what we have come accustom to seeing in Golovkin fights, a one-sided thrashing of his opponent with never a moments concern about Golovkin losing a round, let alone the fight. Though much of that happened, there was something a bit different this time around.

The superhero has lost his cape

Many have said that Golovkin’s resume lacks name worthy opponents, I for one second that notion. The implication that comes with that assertion is that with the lack of name worthy opposition going into fights with Golovkin, he doesn’t have much to worry about knowing he will win. I couldn’t disagree more with that assertion most have as a result of that thought process.

Golovkin’s marketability is built upon an indestructible persona. Any chink in the armor, especially to a less than a worthy opponent can surely hurt the reputation that has been so masterfully constructed. In theory, one could say the road that Golovkin has traveled is actually high risk. Every time out he has more to lose than his opponent so that inherently is a risk. This past Saturday versus Kell Brook is a prime example of that. Brook’s cache in what was basically a one-sided fight has gone up immensely; Golovkin on the other hand oddly enough is the fighter in question.

Was Golovkin exposed? Yes, he was exposed in the way of no longer being seen as indestructible, yet just another very good fighter with flaws like everyone else. Leading into the fight I’d heard many fans say that Golovkin had never lost a round in his professional career, well they can no longer say that. Up until this past Saturday, we hadn’t seen anything remotely close to an opponent of Golovkins unleashing a four punch combination finishing with an uppercut. Most would say the guys he’s fought previously didn’t possess the skill to put together a four punch combination. All more the reason why people are asking was Golovkin exposed.

To be fair to Golovkin, all this hoopla about him being exposed is actually praise as to just how good he’s been since becoming a pro. I mean let’s be honest, aside from 2-3 flurries that I think embarrassed Golovkin far more than it hurt him; this was an absolute demolition of a really good fighter. I always apply a passage from the Bible in situations such as this, “to whom much is given, much is expected.” That said I don’t feel sorry for Golovkin as guys before him have had to endure the same level of expectation. Think Floyd Mayweather vs. Miguel Cotto. People were writing Mayweather off saying he’d lost his ability to move and was a shot fighter because he had suffered a bloody nose. Never mind the fact that he was fighting Miguel Cotto, the untouchable Mayweather had a bloody nose.

For Golovkin this was the first time we saw him momentarily outclassed. I think we’ve all searched to find words to describe what we saw in Kell Brook that we hadn’t seen in any of Golovkins previous opponents. My definition to what we saw was for the first time Golovkin genuinely being outclassed. Another nuance is the comparison factor. We know that every time out what’s going to be on the mind of fans and was the first thing that came to my mind at this finish of the Brook fight, Ward would beat him.

I saw something in his eyes I’ve never seen before

When all was said and done a lengthy video surfaced of the post-fight conference. Golovkin, as many had said leading into the fight, in the post-fight conference, seemed very irritable. Reporters repeatedly questioning Golovkin about his performance implying that Golovkin in some way struggled. One thing I realized watching the post-conference is that Golovkin’s English and comprehension of the English language is far better than we’re lead to believe. Secondly and much more compelling is when I looked in his eyes. For just a moment Golovkin wasn’t in character and I was able to see the real Gennady.

You know what his eyes said to me, they said “I’m tired,” they said dad and husband. They told me a story of a road that was long far before his debut on HBO. They said I’m 34 years old and have had nearly 400 amateur fights. For that brief second that corny, snort when you laugh, unassuming Kazakh dork that hits hard was completely gone, what was there was a man that has done a lot in his life and at the moment would have liked nothing more than to be with his family in the comforts of his home.

I happen to share the same age as Golovkin. For those older than I, I’m sure they can attest when I say being 34 and 25 is a world of difference. And I can say with full confidence it doesn’t matter what shape you’re in, natural wear and tear will have its place.

That thought in mind, I wondered, could it be we’re seeing Golovkin in slight decline? I mean he is 34 after all, and in the world of athletics, there’s very few that have success at or past that age. One thing is certain, if you look closely at him, Gennady will let us see the real him if just for a moment. The happy go lucky, big smile having; hard punching nerd that everyone likes was not in the building. Gennady, a 34-year-old man, husband, and father were all out of smiles. What was left was a man who was tired of the long promotional trail, a man that was tired of answering stupid questions and sought the comfort of his own bed and the simplicity of home. Was he exposed? Yes, exposed as being a human like you and me, not a machine, just a man.