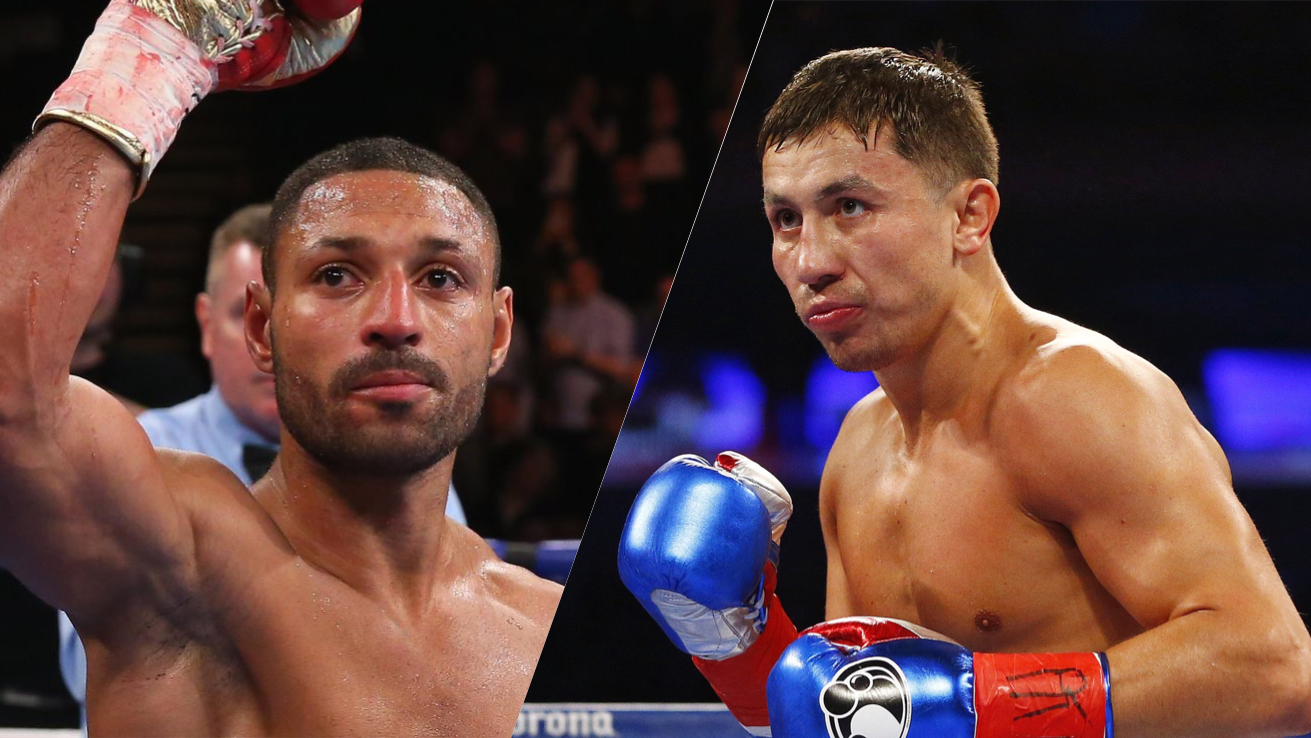 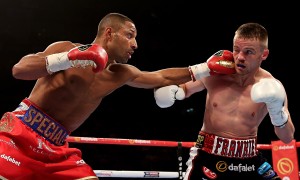 Golovkin vs. Brook was a fight that shocked and surprised the boxing world at first. After the Mortal Combat fatality that Canelo Alvarez pulled against a welterweight in Amir Khan, Golovkin heavily critiqued Canelo’s choice of fighting a welterweight instead of himself. Now after the current top middleweights have decided for a litany of reasons not to face Golovkin, he himself is pulling a welterweight up to middleweight to challenge him. Now most claim this fight a mismatch at the least while others now call Golovkin a hypocrite.

First off, this is a mismatch, that cannot be denied, but this is also not close to the level of a mismatch that Canelo and Khan were at the time. Amir Khan and Kell Brook are two different classes at welterweight period. However, Kell Brook has also not shown himself yet to be in the yoke of a Sugar Ray Leonard or Roberto Duran, men who rose from lower weight classes to challenge middleweight legend, Marvin Hagler. So should fans feel jaded about this fight? Yes, they should but this fight stylistically might be one of the best bouts of the year.

Golovkin, most think of a plodding power puncher, GGG is actually one of the best technical boxers in the game at the moment. His ability to cut the ring off coupled with his exquisite feints, allows him to pick accurate shots based off his opponents reactions when going backward, a dangerous position in boxing to be. Golovkin has shown he has one of if not the best chins in boxing right now, so most think his defense is lacking. However, Golovkin has excellent underrated parrying skills in which to slap away a shot and throw a counter over it.

Kell Brook is a traditional European high guard type of boxer with an added bit of slickness and underrated power to make him one of the most overlooked elite welterweights in the game. Brook’s ring IQ is one of his best qualities. His obvious game plan for arguably a top 5 welterweight Shawn Porter, tie him up on the inside and frustrate him at range, was executed perfectly. Brook has a picture perfect jab and a monstrous right uppercut. He will use his jab to keep distance and keep guys from coming inside. When an opponent is inside, Brook will shoulder bump, turn the corner and fire off a combination either start or end with that devastating uppercut.

Now how will their two respective styles, an underrated boxer who’s seen as a brawler vs. a boxer with an underrated power play out in the ring? Golovkin and Brook both work off their great jabs. Golovkin having the slight reach advantage will be more easily able to work his game from range compared to Brook. Brook, however, cannot let this fight be fought on the inside for too long. GGG will bully him there just like everyone else. Brook’s best shot to beat GGG is in the in-between zone. He will have to be on the outside of GGG’s range, thus not allowing himself to work his game from the outside, but this could draw Golovkin to jump within Brooks range trying to go inside. Brook will need to work a similar game plan from the Porter bout. Tie him up on the inside, throw combinations on the exit, and consistently keep a jab out.

Golovkin though is the deserved favorite for a reason. He has the advantage on the outside and the inside, and staying within the middle is career suicide for his opponent. Brook will try to work his game plan, but the efficient and constant pressure from the bigger and stronger boxer will eventually overwhelm him.

Prediction: Gennady Golovkin via TKO round 8 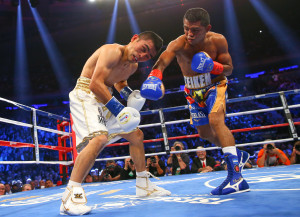 Roman Gonzalez is arguably one of the pound for pound elites at the moment being a three-weight division champion. For being in the lighter weight classes, he still is able to bring a massive level of suspense and action in his fights sporting an 84% knockout rate. His style has endeared him to his now adoptive home and fans out of Los Angeles, California. HBO recently starting airing his fights on their network, usually on the undercard of Gennady Golovkin, another adoptive LA son. The result was an instant connection with the local populace and viewers across the country.

His opponent, the undefeated knockout artist himself, Carlos Cuadras will be seen as one of Gonzalez’s toughest opponents yet. He can do most of the same offensive techniques and combinations that Gonzalez. He also is light on his feet and has underappreciated head movement. Cuadras likes to dance on the outside, slip a straight punch, and then unleash forceful hooks and uppercuts to the body and head.

This fight will look completely even in the early rounds with maybe Cuadras actually getting the better of Gonzalez in the early going. Cuadras finds his range and timing usually within the first round, while Gonzalez needs to establish it by his constant forward pressure. Gonzalez will push forward to get on the inside and look to drown Cuadras with his volume and power. Cuadras will look to keep the fight at range till he chooses to jump on the inside, unleash a combination, exit out the backdoor, and look to rinse and repeat that. Cuadras even with his above average power will not want to have extended periods of time fighting on the inside.

Yes, Cuadras has decent defensive capabilities along with outstanding offensive talent; however, Gonzalez is the king of the phone booth. His amazing chin, cardio, and power make beating and bullying him on the inside the whole fight nearly impossible. This will be an all action bout featuring two skilled undefeated powerful boxers. It will be a battle of who can implement their personal style of violence more efficiently. Will Gonzalez force Cuadras to fight him inside or will Cuadras pick him apart with flashes of combinations and defensive footwork? 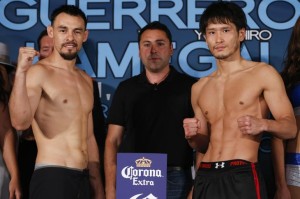 The battle of gatekeepers will be the opening bout of this HBO triple-header, and sure will be exciting however long it lasts. Kamegai, a Japanese boxer-puncher with a penchant for extreme violence will be facing another lover of all things blood and chaos in perennial stepping-stone in Karass.

Kamegai, once a bright exciting prospect, has now been almost trading wins and losses since 2013, with his only two wins coming back-to-back being Tim Hunt and Jung Hoon Yang respectively. Kamegai was one big win away in another gatekeeper in Robert Guerrero from possibly contending with top 10 talent. His last win was against jobber Nelson Gulpe (8-5) last year. Kamegai is a phone booth type of brawler that has awful defense upstairs. He likes to get inside and rip to the body and head with massive power shots.

His opponent, Karass, is of the same yoke but different finishing move so to speak. While Kamegai likes to get inside and try to land that one big knockout blow, Karass likes to use his volume to pummel guys on the inside, ala death via a thousand cuts. Karass has fought some of the best and notable in the business: Devon Alexander, Keith Thurman, Andre Berto, Marcos Maidana, and Gabriel Rosado; but his last win was in 2013 against a poor version of Andre Berto. Karass is the example of a journeyman who made a career in the sport fighting the best guys on their way up. To put how long his career has been fighting above average boxers, he loss to Freddy Hernandez in 2004, the same Hernandez that just beat an over-the-hill Alfredo Angulo at super middleweight a couple weeks ago. He, unfortunately, is also an example of a guy that has taken serious abuse and damage in a career and yet still finds himself against the top tier of talent at 147-154lbs.

This fight will play similar to their first one. Both men on the inside, one using more volume and combinations while the other is trying to end it with one powerful shot. Kamegai and Karass are men that are there to be hit, neither having solid defense and both have an insane affection for the violent art of phone booth boxing. Expect this one to go to a decision since Kamegai fails at setting up his power shots properly, while Karass doesn’t have the one-punch power to hurt and finish Kamegai. Most likely because of the style clash, it will be exciting like the last fight but unfortunately will also be razor thin again. The only way we see a finish is if one of these warriors has a drastic fall in skill or overall boxing health. Karass and Kamegai have both seen unheard of abuse in their respective long careers, so this may be the straw that breaks the camel’s back in terms of their respective above average chins.